The amended development plan involves the conversion of Oseberg from an oil production complex into a major gas producer. Per the plan, two new compressors will be installed to increase recoverable gas volumes. Equinor plans to invest NOK 10 billion to increase the Oseberg gas production.

Beside this, the Oseberg field center and Oseberg South platform will be partly electrified to reduce the field's emissions by 320,000 metric tons per year. With the provision of shoreside electric power, the field's total power demand will be up to 105 megawatts.

Notably, electrification is an effective measure against climate change as it involves a rapid and significant reduction in emissions. In 2020, emissions from the Oseberg field totaled one million tons of carbon dioxide. Since 2010, Oseberg emissions have been reduced by 15%, with an aim to further reduce it by 50-70% by 2030.

Equinor operates with a 49.3% ownership interest in the Oseberg field, which is already a major gas-producing asset on the Norwegian Continental Shelf. When the field became operational, it was expected to produce one billion oil barrels. Equinor currently expects to produce 3.2 billion barrels of oil, making it one of the largest producing fields in Norway.

Oseberg has the third-most unextracted gas behind Troll and Snohvit, with 60% of the gas resources yet to be recovered. The latest investment decision will enable Equinor to increase gas production, while significantly reducing emissions. Equinor expects Oseberg to produce more than 100 billion cubic meters of gas by 2040. EQNR will also prepare for any full electrification of the installations in the future.

The development program is expected to take four years to complete, with the modified complex starting service in 2026.

Shares of EQNR have outperformed the industry in the past three months. The stock has gained 14.6% compared with the industry's 9.8% growth. 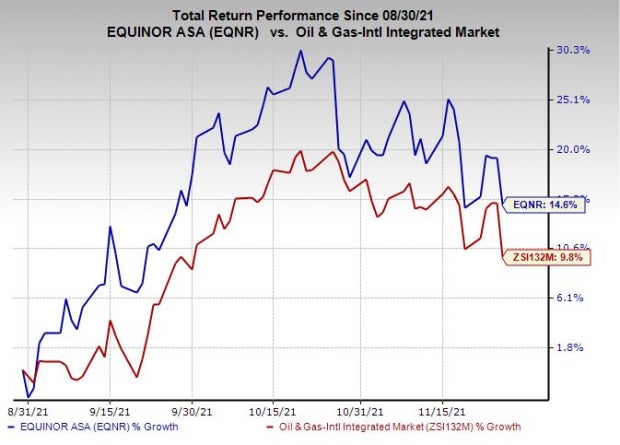 In the past year, the DVN stock has soared 220.1% compared with the industry's growth of 118.4%. In the past 60 days, the Zacks Consensus Estimate for Devon Energy's 2021 earnings has been raised by 20.6%. It is also projected to see a year-over-year earnings surge of 3877.8% in 2021. DVN's free cash flow at the end of third-quarter 2021 was $1.1 billion, up eight-fold from fourth-quarter 2020 levels. The company will continue to prioritize free cash flow generation in 2022 and deploy a major portion of the same to dividends and share buybacks.

PDC Energy (PDCE - Free Report) is an independent upstream operator that engages in the exploration, development and production of natural gas, crude oil and natural gas liquids. PDCE, which reached its present form following the January 2020 combination with SRC Energy, is currently the second-largest producer in the Denver-Julesburg Basin. As of 2020-end, PDC Energy's total estimated proved reserves were 731,073 thousand barrels of oil equivalent.

In the past year, shares of PDC Energy have gained 217.4% compared with the industry's growth of 118.4%. PDCE's earnings for 2021 are expected to surge 273.4% year over year. In the past 60 days, the Zacks Consensus Estimate for PDC Energy's 2021 earnings has been raised by 26.8%. PDCEbeat the Zacks Consensus Estimate in the last four quarters, ending with an earnings surprise of 51.06%, on average.

SM Energy Company (SM - Free Report) is one of the most attractive players in the exploration and production space, which engages in the exploration, exploitation, development, acquisition and production of natural gas and crude oil in North America. SM's operations focus on the Permian Basin, and the South Texas and Gulf Coast regions. SM has a total of 443,188 net acres under its possession, of which 33.5% is developed.

In the past year, shares of SM Energy have gained 578.4% compared with the industry's growth of 118.4%. SM's earnings for 2021 are expected to surge 708.7% year over year. SM currently has a Zacks Style Score of A for both Growth and Momentum. The upstream energy player beat the Zacks Consensus Estimate thrice in the last four quarters and missed once. SM Energy has a trailing four-quarter earnings surprise of 126.3%, on average.

Semtech (SMTC) to Report Q3 Earnings: What's in the Cards?