Deciphera (DCPH) Down More Than 70% in Past 3 Months: Here's Why

Shares of Deciphera Pharmaceuticals, Inc. (DCPH - Free Report) have plunged 74.2% in the past three months compared with the industry’s decrease of 16.1%. 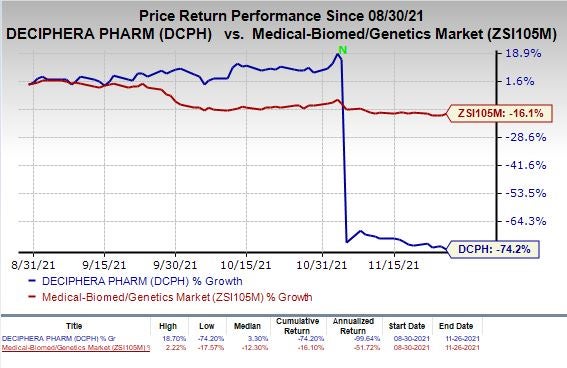 In November 2021, the company announced top-line data from the phase III INTRIGUE study evaluating the safety and efficacy of its sole marketed drug, Qinlock (ripretinib) compared to Pfizer’s (PFE - Free Report) Sutent (sunitinib) for treating patients with gastrointestinal stromal tumors (“GIST”) who were previously treated with Novartis’ (NVS - Free Report) Gleevec (imatinib). The study did not meet the primary endpoint of improved progression-free survival compared with standard of care sunitinib in patients with second-line GIST.

Deciphera’s stock took a sharp fall as a result of this news, which can also cause the stock price to remain weak in this time frame.

We note that Novartis has lost the patent protection for some of its drugs. Gleevec faces increasing generic competition in major markets. Pfizer is also facing patent expiration for several of its key products in its portfolio. Sutent lost exclusivity in the United States in August 2021.

Qinlock, a tyrosine kinase inhibitor, is approved for the treatment of adult patients with advanced GIST who have received prior treatment with three or more kinase inhibitors, including Novartis’ Gleevec. The initial uptake of the drug has been encouraging since its approval in May 2020.

In the first nine months of 2021, Qinlock generated sales worth $63.7 million. The approval in Europe should boost sales in the days ahead.

Deciphera currently has only one approved product in its portfolio — Qinlock. This apart, all of its drug candidates, including vimseltinib, rebastinib and DCC-3116, are still in early stages of development. The recent regulatory setback with respect to Qinlock in second-line GIST in the INTRIGUE study has significantly hurt the stock. Such setbacks do not bode well for the company. Stiff competition is another area of concern.

Please note that Qinlock faces competition from Blueprint Medicines’ (BPMC - Free Report) Ayvakit, which is approved for the treatment of unresectable or metastatic GIST, harboring a PDGFRA exon 18 mutation, including PDGFRA D842V mutations in adults.