The project will produce and process natural gas from the offshore Ca Voi Xanh field, one of Vietnam's largest gas fields. Located in the South China Sea, the gas field is positioned about 80 kilometers off the coast between the country's Quang Nam and Quang Ngai central areas. Natural gas would run through an 80-kilometer pipeline to be processed near Danang and supplied to four associated power plants.

In October, ExxonMobil board members were considering whether to proceed with several oil and gas projects, including Ca Voi Xanh, amid the growing urgency for fossil fuel companies to limit carbon emissions. The project will help the country to address the concerns regarding the security of energy supplies as it is becoming challenging to fund coal-fired power generation projects, with large offshore discoveries remaining unexploited for years.

ExxonMobil and its partners have completed the front-end engineering and design of the project. A final investment decision on the Ca Voi Xanh project is yet to be reached, depending on regulatory approvals, executed gas sales agreements, government guarantees and economic competitiveness.

Shares of ExxonMobil have outperformed the industry in the past three months. The XOM stock has gained 14.5% compared with the industry's 10.4% growth. 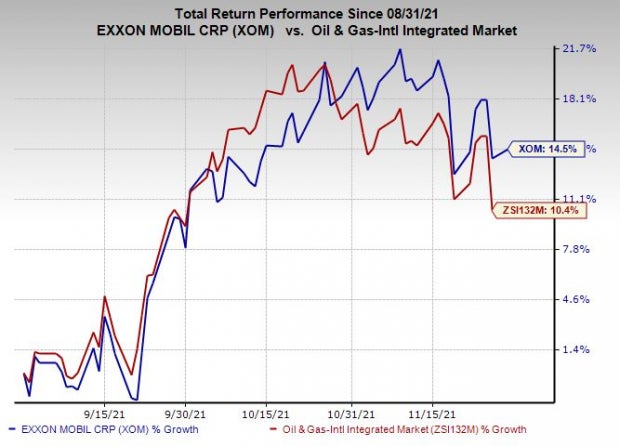 Centennial Resource Development, Inc. (CDEV - Free Report) , based in Denver, CO, is an independent oil and gas exploration and production company. CDEV primarily develops unconventional hydrocarbon reserves in the Delaware Basin, part of the prolific Permian Basin. Centennial Resource's net production in 2020 was recorded at 67,161 barrels of oil equivalent per day, of which oil contributed 53.7%, and natural gas and natural gas liquids accounted for the rest.

In the past year, shares of Centennial Resource have gained 472.1% compared with the industry's growth of 118.8%. CDEV is expected to see an earnings growth of 127.6% in 2021. Centennial Resource has witnessed five upward revisions in the past 60 days. In third-quarter 2021, CDEV's constant focus on cost reduction helped it generate net cash of $153.5 million from operating activities compared with $45.7 million in the year-ago period. The free cash flow generated in the quarter was $77.2 million, significantly increasing from $10.5 million in the year-ago period.

Occidental Petroleum Corporation (OXY - Free Report) is an integrated oil and gas company, with significant exploration and production exposure. OXY is also a producer of a variety of basic chemicals, petrochemicals, polymers and specialty chemicals. As of 2020-end, Occidental Petroleum's preliminary worldwide proved reserves totaled 2.91 billion BOE compared with 3.9 billion BOE at the end of 2019.

In the past year, shares of Occidental Petroleum have increased 99% compared with the industry's growth of 96.6%. OXY's 2021 earnings are expected to surge 151.4% year over year. Occidental Petroleum has also witnessed eight upward revisions in the past 60 days. In the third quarter, OXY achieved its planned divestiture target of $10 billion by entering a deal to sell its interest in two offshore Ghana assets for $750 million.

Range Resources Corporation (RRC - Free Report) is an independent energy company that engages in the exploration, development and acquisition of oil and gas properties, primarily in the Appalachian Basin and North Louisiana. RRC is among the top 10 natural gas producers in the United States. Range Resources is among the top NGL producers in the domestic market. As of 2020 end, RRC's total proved reserves were 17.2 trillion cubic feet equivalent.