The Keytruda combination is now approved for treating adults with advance renal cell carcinoma (RCC) or kidney cancer in the first-line setting. The combination regimen received approval for treating advanced endometrial carcinoma, which starts in the uterus, in adult patients whose disease has progressed on or after treatment with a platinum-containing therapy in any setting and who are not eligible for curative surgery or radiation. Keytruda plus Lenvima were approved for both the indications in the United States in mid-2021.

The approval for first-line RCC was based on data from the phase III study — CLEAR/KEYNOTE-581 — that demonstrated that treatment with Keytruda plus Lenvima achieved statistically significant improvement in progression-free survival (“PFS”) compared to Pfizer’s (PFE - Free Report) kidney cancer drug, Sutent (sunitinib). The combination regimen reduced the risk of disease progression or death by 61% compared to Pfizer’s Sutent.

Data from the CLEAR/KEYNOTE-581 study demonstrated that treatment with the Keytruda plus Lenvima extended the median PFS to 23.9 months from 9.2 months following treatment with Pfizer’s Sutent. Merck’s Keytruda in combination with Lenvima reduced the risk of death by 34% compared to PFE’s Sutent.

Please note that Keytruda, in combination with Pfizer’s Inlya (axitinib), is already indicated for the first-line treatment of adult patients with advanced RCC in Europe.

Meanwhile, the approval for the endometrial carcinoma indication was backed by data from another phase III study — KEYNOTE-775/Study 309. Data from the late-study demonstrated that Keytruda plus Lenvima improved overall survival and PFS by 38% and 44%, respectively. The improvements were statistically significant compared to chemotherapy.

Merck’s stock has declined 8.5% this year so far against an increase of 14.2% for the industry. 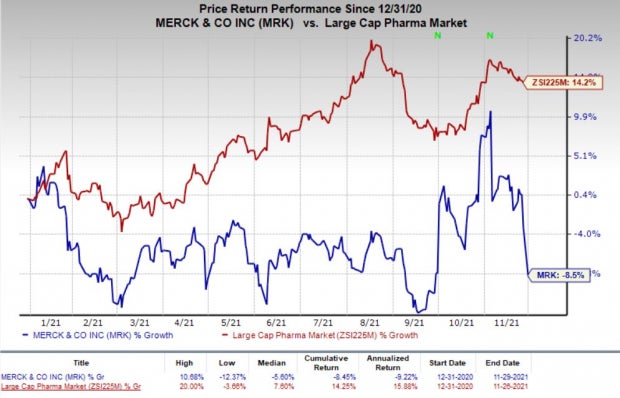 Label expansions of Keytruda in Europe to include first-line RCC and recurrent endometrial carcinoma represents a significant opportunity.

Keytruda, approved for various oncology indications, is the key growth driver for Merck and further label expansion of the drug will aid the top line.

A couple of better-ranked stocks from the pharma/biotech sector include GlaxoSmithKline (GSK - Free Report) and Sarepta Therapeutics (SRPT - Free Report) , both carrying a Zacks Rank #2 (Buy). You can see the complete list of today’s Zacks #1 Rank (Strong Buy) stocks here.