Here's Why Qualcomm (QCOM) is an Appealing Bet for Investors

Driven by a resilient business model, shares of Qualcomm Incorporated (QCOM - Free Report) have gained 21.5% compared with the industry’s growth of 19.5% in the past year. With the accelerated deployment of 5G technology, the company has been benefiting from investments toward building a licensing program in mobile. 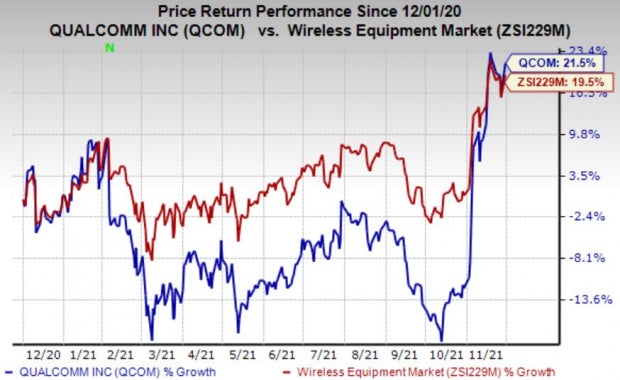 The company is witnessing healthy traction in EDGE networking, which helps to transform connectivity in cars, business enterprises, homes, smart factories, next-generation PCs, wearables and tablets. Moreover, it is on track to record solid revenues across RF front-end, IoT and Automotive as its business continues to diversify.

Qualcomm delivered a trailing four-quarter earnings surprise of 11.2%, on average. The Zacks Consensus Estimate for its current-year earnings has been revised 14.1% upward over the past 30 days. The stock currently carries a Zacks Rank #2 (Buy) and has a VGM Score of B.

Headquartered in San Diego, CA, Qualcomm is one of the largest manufacturers of wireless chipsets based on baseband technology. The company is focusing to retain its leadership in 5G, chipset market and mobile connectivity with several technological achievements and innovative product launches.

5G ramp-up, chip design win momentum, RF front-end demand and a rise in consumer electronics’ revenues act as prime catalysts. In addition, it is witnessing strong momentum in IoT across consumer, edge networking and industrial sectors, backed by strength in its Snapdragon portfolio within the automotive sector.

The company is well positioned to benefit from solid 5G traction with greater visibility and a diversified revenue stream to meet its long-term revenue targets. It gained significantly from strong demand across emerging product categories such as XR and wearables, along with 4G and 5G mobile broadband devices and rapid adoption of Wi-Fi 6. We believe that the stock has more upside potential left. Supported by such healthy business dynamics and a diligent operational execution, the chipmaker giant appears to be an enticing bet for investors at the moment.

Of late, the company has been in news related to its acquisition of Veoneer, Inc. (VNE - Free Report) for $4.5 billion. This acquisition puts an end to the bidding war brewing between the chipmaker and Magna International, a Canada-based mobility technology company for automakers.

Per the deal, Qualcomm partnered with New York-based SSW Partners to acquire Veoneer in an all-cash transaction for $37 per share, an 18% premium over Magna’s bid made in July. The boards of both Veoneer and Qualcomm have approved the transaction and the deal is expected to close next year.

Veoneer already has an existing relationship with Qualcomm. The two companies signed an agreement this January to collaborate on an ADAS platform. The agreement integrates Qualcomm’s silicon technology and tool chain with Veoneer’s sensor and software system in an ADAS solution. This pre-relationship provides the rationale behind Qualcomm winning the buyout offer.

Further, Qualcomm recently took the investor community by surprise when it revealed some ambitious growth targets through fiscal 2024.The company expects to witness a stellar rise in its addressable market opportunities from $100 billion at present to more than $700 billion in the next decade as it continues to diversify its revenue stream to cater to various customer segments across several industries.

Management expects fiscal 2024 revenues to reach $46 billion with contribution from IoT devices likely to grow up to $9 billion. Revenues from Qualcomm CDMA Technologies segment are expected to record a CAGR of mid-teens by fiscal 2024 with an operating margin of more than 30%. Automotive revenues are expected to grow to $3.5 billion in five years and $8 billion in 10 years.

Clearfield, Inc. (CLFD - Free Report) carries a Zacks Rank #2. The Zacks Consensus Estimate for its current-year earnings has been revised 8.8% upward over the past 30 days. You can see the complete list of today’s Zacks #1 Rank (Strong Buy) stocks here.

Clearfield delivered a trailing four-quarter earnings surprise of 50.8%, on average. CLFD has surged 172.9% in the past year.

Sierra Wireless, Inc. (SWIR - Free Report) is another solid pick for investors, carrying a Zacks Rank #2. The consensus estimate for current-year earnings has narrowed from a loss of $1.22 per share to a loss of 97 cents over the past 30 days.

Sierra Wireless delivered a trailing four-quarter earnings surprise of 34.2%, on average. It has gained 17.6% in the past year. SWIR has a long-term earnings growth expectation of 12.5%.