Fresenius Medical Care AG & Co. (FMS - Free Report) recently announced that it is launching a new dialyzer for hemodialysis, the FX CorAL— the newest dialyzer in the company’s FX class of dialyzers which use polysulfone (a special plastic with exceptional filtering and hemocompatibility characteristics). The FX CorAL was unveiled in Fresenius Medical Care’s NephroCare clinics after it received the CE mark, and has already been used in more than three million treatments.

For investors’ note, the FX CorAL is already available in Switzerland and will be gradually launched in Germany, France, Italy and the United Arab Emirates. Other countries in the company’s Europe, Middle East and Africa region will follow.

The latest launch is expected to significantly solidify Fresenius Medical’s business on a global scale.

The highlight of the FX CorAL dialyzer is its clinical performance and hemocompatibility. It is noteworthy to mention that dialysis patients often suffer from chronic inflammation caused by the accumulation of toxic substances and the regular contact of their blood with external substances. These inflammations reduce patients’ quality of life and lead to the onset of cardiovascular diseases.

The design of the FX CorAL dialyzer is such that it absorbs lower proteins, thereby achieving a lower induction of the immune response in the patient while maintaining high selective permeability for the removal of toxins and excess water. Additionally, all FX-class dialyzers are steam-sterilized and environment friendly.

Per a report published by Market Reports World, the global dialyzer market was valued at $6535 million in 2020 and is expected to reach $10210 million by the end of 2027 at a CAGR of 6.6%. Factors like rise in elderly population and surge in incidence of renal diseases (especially end stage renal disease) are likely to drive the market.

Given the market potential, the latest launch is expected to significantly boost Fresenius Medical’s business on a global scale. 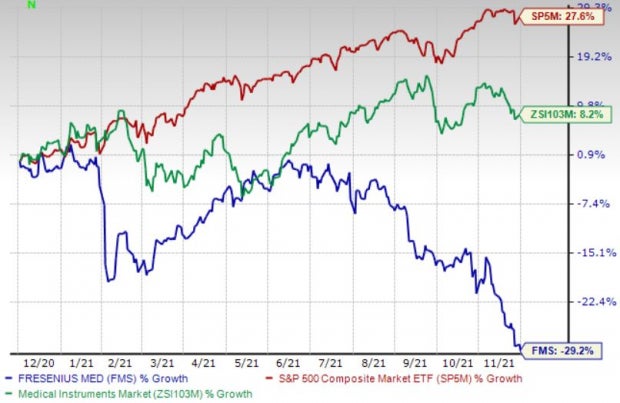 AmerisourceBergen has an estimated long-term growth rate of 11.3%. The company surpassed estimates in the trailing four quarters, the average surprise being 5.48%.

Thermo Fisher has an estimated long-term growth rate of 14%. The company surpassed estimates in the trailing four quarters, the average surprise being 9.02%.

AMN Healthcare has an estimated long-term growth rate of 16.2%. The company surpassed estimates in the trailing four quarters, the average surprise being 19.51%.