General Mills Inc. (GIS - Free Report) divested 51% controlling interest in its European Yoplait operations to Sodiaal. The deal was initially announced on Mar 23. The company now has full ownership of the Canadian Yoplait business. GIS is likely to charge reduced royalty fees for using the Yoplait and Liberte brands in the United States and Canada.

The move is part of General Mills’ Accelerate strategy, which aims to boost profitability through geographic and product prioritization along with portfolio restructuring and enhancing shareholder returns in the long run. Keeping in these lines, it has acquired pet treats business Tyson Foods (TSN - Free Report) and intends to offload its European dough businesses to Cerelia. Management anticipates concluding the transactions by the end of fiscal 2022. The divestitures will put the company a step closer to achieving the Accelerate strategy priorities.

General Mills has been gaining from three core priorities, including efficient competition, investments in brands and capabilities, as well as reducing leverage. With regard to its firstpriority, GIS has been prioritizing core markets, local gem brands and global platforms alongside utilizing its innovation and brand-building capacities.

As part of the second priority, GIS is on track with its Holistic Margin Management (“HMM”) and Strategic Revenue Management (“SRM”) initiatives. Also, management has been focused on reshaping the portfolio, investing in digital, e-commerce, and data and analytics, which appear to be promising areas. The three key priorities for fiscal 2022 are also in sync with the Accelerate strategy.

In the fiscal first quarter, net sales in the Pet segment grew 25% year over year on the back of solid volume growth as well as positive net price realization and mix. Net sales growth included 5 points of gains from the recently-acquired Tyson Foods’ pet treats business.

The recently-acquired pet treats business is expected to contribute 2 cents to the bottom line in fiscal 2022. The company’s investments in the Food, Drug and Mass (“FDM”) channel expansion are also working well for the segment.

Driven by these factors, shares of this Zacks Rank #3 (Hold) stock gained 7.6% in the past three months against the industry’s decline of 3.5%. 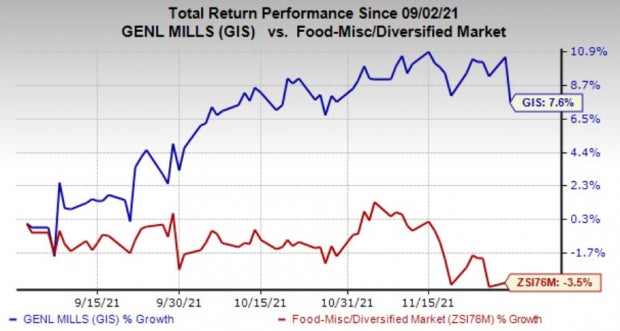 However, the company is witnessing input cost inflation, supply-chain costs and fixed cost deleverage. Management expects total input cost inflation of 7-8% for fiscal 2022, up from the previously mentioned 7%, thanks to supply and demand imbalances, volatile weather, and challenges in transportation as well as labor markets.

Albertsons Companies currently sports a Zacks Rank #1 (Strong Buy). ACI has a trailing four-quarter earnings surprise of 37.6%, on average. Shares of Albertsons Companies have gained 17.1% in the past three months. You can see the complete list of today’s Zacks #1 Rank stocks here.

The Zacks Consensus Estimate for sales for Albertsons Companies’ current financial year suggests year-over-year growth of 3.6%, while the same for earnings per share indicates a decline of 16.7% from the year-ago period’s reported figure. ACI has an expected long-term earnings growth rate of 12%.

Helen of Troy presently carries a Zacks Rank #2 (Buy). HELE has a trailing four-quarter earnings surprise of 19.8%, on average. Shares of the company have gained 2.9% in the past three months.

The Zacks Consensus Estimate for Helen of Troy’s sales and earnings per share for the current financial year suggests a decline of 15.9% and 16.2%, respectively, from the year-ago period’s reported numbers. HELE has an expected long-term earnings growth rate of 8%.