The company remains on track to file a biologics license application (“BLA”) with the FDA seeking accelerated approval for mirvetuximab in the first quarter of 2022.

Shares of ImmunoGen surged almost 30% on Nov 30, following the successful completion of its pivotal study. ImmunoGen’s shares have lost 4.4% so far this year compared with the industry’s decrease of 19%. 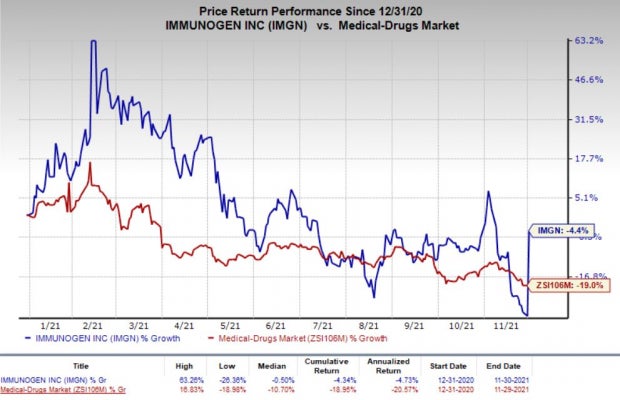 Data from the SORAYA study demonstrated that treatment with mirvetuximab achieved an ORR of 32.4% and 31.6% as assessed by a study investigator and a blinded independent central review (BICR), respectively. The median duration response (“DOR”) was 5.9 months as of the data cut-off date. Nearly half of responding patients have continued on therapy and the company expects the final median DOR to improve and could range from 5.7 to just above 7 months. The candidate also demonstrated impressive tolerability with a 10% discontinuation rate.

ImmunoGen is currently focusing on the potential launch of mirvetuximab next year, following an anticipated approval. The company is also evaluating the candidate in a confirmatory study — MIRASOL — for a similar patient population like the SORAYA study. Data from the MIRASOL study will support full or continued approval for the candidate. It is also developing mirvetuximab combination regimens for earlier lines of treatment in FR alpha-high ovarian cancer patients.

Endo delivered an earnings surprise of 57.69%, on average, in the last four quarters.

Assertio delivered an earnings surprise of 33.33%, on average, in the last four quarters.