The company will focus on the development of its pipeline candidates, vimseltinib and DCC-3116, while discontinuing the rebastinib program. A phase III study on rebastinib for treating patients with platinum-resistant ovarian cancer was expected to begin in 2022.

The company will streamline commercial operations for its sole marketed drug, Qinlock (ripretinib), in the United States and focus on commercialization efforts on a select number of key European markets for the medicine.

Shares of the company were up 12.1% on Tuesday following the announcement of the news. However, the stock has declined 84.9% so far this year compared with industry’s decrease of 15.2%. 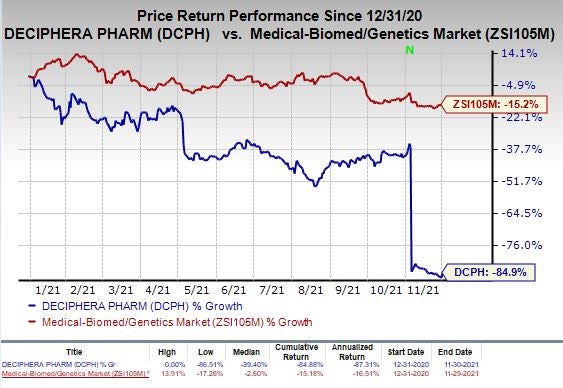 Qinlock is approved in the United States for the treatment of adult patients with advanced gastrointestinal stromal tumor (“GIST”) who have received prior treatment with three or more kinase inhibitors, including Novartis’ (NVS - Free Report) Gleevec (imatinib).

Novartis has lost the patent protection for Gleevec, which faces increasing generic competition in major markets.

Deciphera will now focus on commercialization plans for Qinlock on a select number of key European markets like Germany and France. In November 2021, the European Commission approved Qinlock for the treatment of fourth-line GIST.

In the first nine months of 2021, Qinlock generated sales worth $63.7 million. The approval in Europe should boost sales in future quarters.

Also, the company will stop the further clinical development of Qinlock including a phase Ib/II study of the same in combination with Mektovi (binimetinib), an approved MEK inhibitor, in patients with post-imatinib GIST, which was expected to begin shortly.

Deciphera will reduce its current workforce by approximately 35% or almost 140 positions. The changes in the clinical development programs and the restructuring efforts are expected to bring a significant reduction in the company’s operating expenses and extend the cash runway into 2024.

The company expects a one-time cash charge of around $32 million in the fourth quarter, resulting from the workforce reduction and discontinuation of the rebastinib study.