Hilton Worldwide Holdings Inc. (HLT - Free Report) has been gaining from focus on improving RevPAR, unit expansion, hotel conversions, strategic partnerships and loyalty program. So far this year, the company’s shares have gained 16.8%, compared with the industry’s growth of 7.1%.  Although 99% of the properties are in operation, the company has been witnessing significantly lower occupancy rates compared with pre-pandemic levels. Let’s delve deeper.

With restrictions being lifted and approximately 99% of its properties operating, Hilton’s business has been recovering on improved demand post the summer period. The company is likely to benefit from gradual improvement in travel demand owing to ramped up vaccinations and ease in government restrictions. Rise in leisure demand coupled with rebound in corporate transient and group businesses are likely to favor the company in the days ahead.

During the third quarter, system-wide comparable revenue per available room (RevPAR) increased 98.7% on a currency-neutral basis owing to an increase in occupancy and average daily rate (ADR). Additionally, RevPAR improved 17 percentage points on a sequential basis. The uptrend was driven by a solid leisure demand in the United State and Europe. Also, a rise in vaccination rates and consumer spending coupled with improving business activity contributed to the upside.

In a bid to maintain its position as the fastest-growing global hospitality company, Hilton is continuing to drive unit growth. During third-quarter 2021, Hilton opened 96 new hotels. It achieved net unit growth of nearly 11,200 rooms, up 6.6% on a year-over-year basis. During the quarter, the company opened the 500th hotel under its Home2 Suites by Hilton brand. The company announced the opening of three new hotels under LXR Hotels & Resorts.

The Zacks Rank #3 (Hold) company has created one of the largest loyalty programs — Hilton Honors. With more than 115 million members, this network created an extremely valuable asset for the company. In the meantime, innovations such as the Hilton Honors app continue to drive growth. In addition to being the company’s fastest growing and lowest cost distribution channel, this app, launched in December 2017, allows a differentiated customer experience. Meanwhile, during the first quarter of 2021, the company (in collaboration with American Express) launched two new co-branded credit cards in Japan to boost membership offerings through Hilton Honors bonus points. This marks the first of a kind offering to customers outside the United States.

Nonetheless, with membership levels increasing 11% on a year-over-year basis (as of third-quarter 2021), the company continues to outline opportunities to engage its Honors members through enhanced partnerships and points redemption offerings. 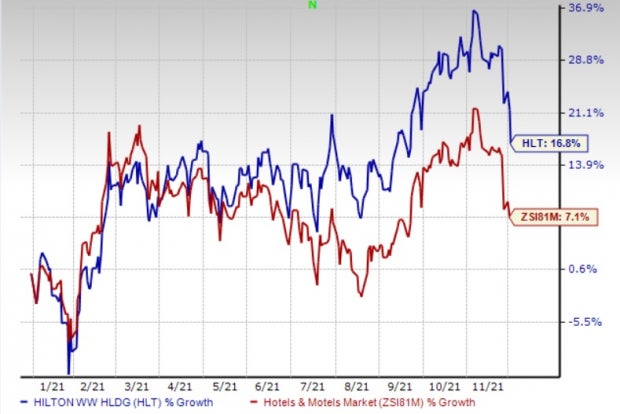 During third-quarter 2021, the company’s performance was negatively impacted by rising COVID cases and prolonged travel restrictions, particularly in the Asia Pacific region. The company’s performance was tempered due to lockdowns in Australia and New Zealand. Although 99% of the properties are in operation, the company is witnessing significantly lower occupancy rates compared with pre-pandemic levels. Owing to the pandemic, RevPar is still lagging behind pre-pandemic levels.

Hilton Grand Vacations sports a Zacks Rank #1 (Strong Buy). The company has a trailing four-quarter earnings surprise of 411.1%, on average. Shares of the company have jumped 44.6% so far this year. You can see the complete list of today’s Zacks #1 Rank stocks here.

Bluegreen Vacations flaunts a Zacks Rank #1. The company has a trailing four-quarter earnings surprise of 695%, on average. Shares of the company have surged 115.4% so far this year.

Camping World carries a Zacks Rank #2 (Buy). The company has been benefiting from the launch of a fresh peer-to-peer RV rental marketplace and a mobile service marketplace. It has been investing heavily in product development.

Camping World has a trailing four-quarter earnings surprise of 70.9%, on average. Shares of the company have appreciated 64.6% so far this year. The Zacks Consensus Estimate for CWH’s financial-year sales and EPS suggests growth of 25.9% and 77.1%, respectively, from the year-ago period’s levels.