The acquisition involves Shell's 225,000 net Permian acres, with current production of nearly 175,000 barrels of oil equivalent per day. The acquired assets involve 600 miles of operated oil, natural gas, water pipelines and other energy infrastructure. The acquisition makes ConocoPhillips one of the leading producers in the Permian Basin. ConocoPhillips expanded its footprint there after it took over the oil and gas producer Concho Resources last year.

Shell's exit from the Permian Basin is part of its strategy to emphasize low-carbon fuels, while targeting net-zero emission. In May, the company was ordered by a Dutch court to reduce emissions significantly and rapidly after losing a case against the Friends of the Earth.

ConocoPhillips' Permian footprint increased significantly over the past year. Due to the changing perspectives on fossil fuels, oil and gas producers have often been skeptical about whether to focus on hydrocarbons, going forward. The shifting focus among the industry's leading producers created opportunities for ConocoPhillips, which remains more aligned toward regular oil and gas production.

Shares of COP have outperformed the industry in the past three months. The stock has gained 23.8% compared with the industry's 14.4% growth. 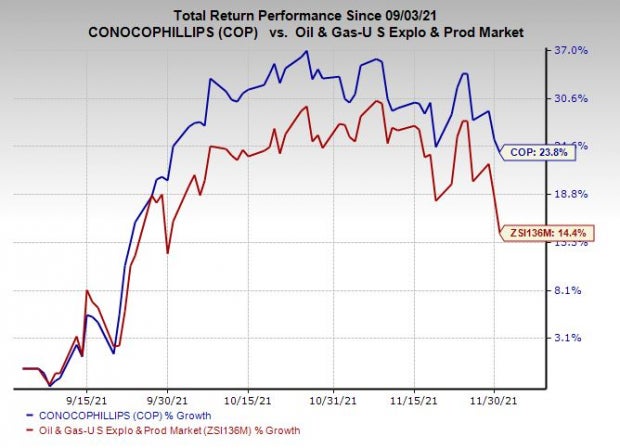 Investors interested in the energy sector might look at the following companies that also presently flaunt a Zacks Rank #1. You can see the complete list of today's Zacks #1 Rank stocks here.

Diamondback Inc. (FANG - Free Report) , based in Midland, TX, is an independent oil and gas exploration and production company. FANG primarily focuses on the Permian basin, with around 414,000 net acres. The upstream operator focuses on growth through a combination of acquisitions and active drilling in America's hottest and lowest-cost shale region. As of 2020-end, Diamondback held 1,316 million barrels of oil equivalent in proved reserves.

In the past year, shares of Diamondback have gained 150.8% compared with the Zacks Exploration and Production Industry's growth of 108.6%. FANG is expected to see an earnings growth of 269.7% in 2021. The company has also witnessed 10 upward revisions in the past 30 days. Diamondback's board of directors recently declared a quarterly dividend of 50 cents per share for the third quarter, indicating an 11.1% hike in its quarterly payout from the previous level of 45 cents.

In the past year, the DVN stock has soared 179.8% compared with the industry's growth of 108.6%. It is also projected to see a year-over-year earnings surge of 3877.8% in 2021. The company has witnessed seven upward revisions in the past 30 days. DVN's free cash flow at the end of third-quarter 2021 was $1.1 billion, up eight-fold from the fourth-quarter 2020 levels. The company will continue to prioritize free cash flow generation in 2022 and deploy a major portion of the same to dividends and share buybacks.