Equinor ASA (EQNR - Free Report) signed an agreement to divest its non-operated equity position in the Corrib offshore gas project to Vermilion Energy Inc. for a consideration of $434 million.

The Corrib field, which began production in 2015, lies about 83 kilometers off the northwest coast of Ireland, 350 meters below the water surface. For 2021, Equinor's equity gas volumes are estimated at 58 million cubic feet per day.

Equinor currently has a 36.5% ownership interest in the Corrib project. With the divestment, Equinor will retreat its active business presence from Ireland. Recently, EQNR decided to stop its early phase of offshore wind activities offshore Ireland. Then again, Vermilion, the operator of the Corrib field, owns a 20% stake in the project. The latest acquisition will add about 3 million barrels of oil equivalent of 2P reserves.

As part of the deal, Equinor and Vermilion decided to hedge about 70% of the production for 2022 and 2023. Beside this, the companies agreed on a contingent payment, which will be paid on a portion of the revenues if Europe gas prices exceed a given floor level.

The Corrib offshore gas project has been a crucial non-operated project to Equinor for years. Equinor decided to divest the asset to focus on its portfolio to capture value from the current strong market situation and make capital to invest elsewhere.

The transaction is structured through a share sale of Equinor Energy Ireland Limited, which is fully owned by Equinor. The deal, subject to approvals by partners, government, and regulatory bodies, is expected to complete in the second half of 2022.

Shares of EQNR have outperformed the industry in the past three months. The stock has gained 10.8% compared with the industry's 7.5% growth. 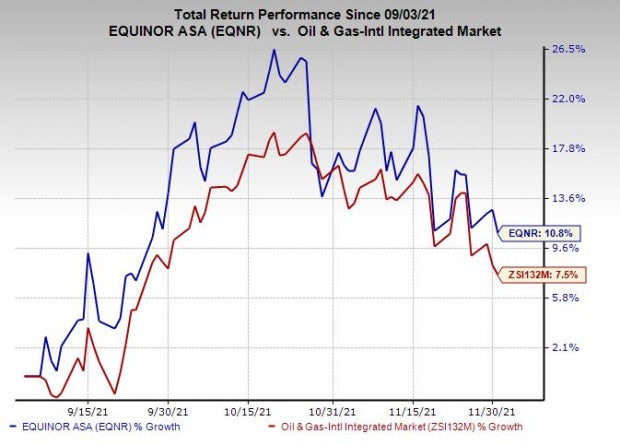 PDC Energy (PDCE - Free Report) is an independent upstream operator that engages in the exploration, development and production of natural gas, crude oil and natural gas liquids. PDCE, which reached its present form following the January 2020 combination with SRC Energy, is currently the second-largest producer in the Denver-Julesburg Basin. As of 2020-end, PDC Energy's total estimated proved reserves were 731,073 thousand barrels of oil equivalent.

In the past year, shares of PDC Energy have gained 169% compared with the industry's growth of 108.6%. PDCE's earnings for 2021 are expected to surge 273.4% year over year. In the past 60 days, the Zacks Consensus Estimate for PDC Energy's 2021 earnings has been raised by 26.8%. PDCE beat the Zacks Consensus Estimate in the last four quarters, with an earnings surprise of 51.06%, on average.

Range Resources Corporation (RRC - Free Report) , based in Fort Worth, TX, is an independent energy company that engages in the exploration, development and acquisition of oil and gas properties, primarily in the Appalachian Basin and North Louisiana. RRC is among the top 10 natural gas producers in the United States. It is among the top NGL producers in the domestic market. As of 2020 end, RRC's total proved reserves were 17.2 trillion cubic feet equivalent.

Occidental Petroleum Corporation (OXY - Free Report) is an integrated oil and gas company, with significant exploration and production exposure. OXY is also a producer of a variety of basic chemicals, petrochemicals, polymers and specialty chemicals. As of 2020-end, Occidental's preliminary worldwide proved reserves totaled 2.91 billion BOE compared with 3.9 billion BOE at the end of 2019.

OXY's earnings for 2021 are expected to surge 151.4% year over year. OXY has also witnessed eight upward revisions in the past 60 days. In the third quarter, OXY achieved its planned divestiture target of $10 billion by entering a deal to sell its interest in two offshore Ghana assets for $750 million. OXY beat the Zacks Consensus Estimate thrice in the last four quarters and missed once, with an earnings surprise of 13.7%, on average.