Dollar General Corporation (DG - Free Report) has reported better-than-expected third-quarter fiscal 2021 results. However, the bottom line declined year over year. Probably, a soft same-store sales performance and an earnings decline marred investors’ sentiment on the stock. Although management updated its fiscal 2021 guidance based on robust results in the first three quarters, investors continued to be disappointed. Shares of Dollar General fell 2.7% during the pre-market trading hours on Dec 2.

Shares of this Zacks Rank #3 (Hold) company have gained 0.1% in the past three months compared with the industry’s rally of 6.8%. 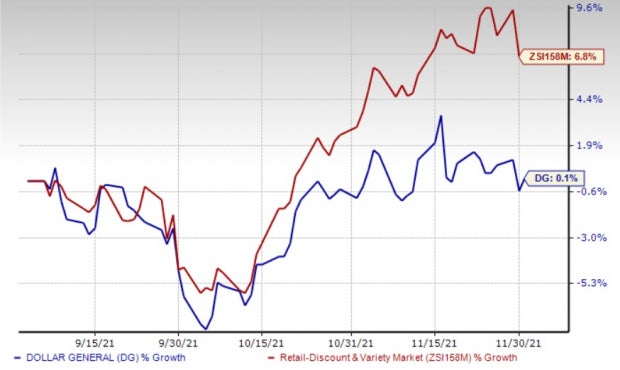 Quarterly earnings were $2.08 per share, which handily beat the Zacks Consensus Estimate of $2.02 but declined 10% from the prior-year period.

Net sales of $8,517.8 million rose 3.9% from the prior-year period on sales contributions from new stores, partly negated by the impact of store closures and a decline in same-store sales. The top line surpassed the Zacks Consensus Estimate of $8,507 million.

Dollar General’s same-store sales fell 0.6% year over year, owing to lower customer traffic, partly offset by a rise in the average transaction amount. Same-store sales also reflected a decline in the apparel and seasonal categories, offset by gains in consumables and home products.

The gross profit improved 2% to $2,619.4 million in the reported quarter, while gross margin contracted 57 basis points to 30.8%. The decline wasdue to higher transportation expenses, an increased LIFO provision, a significant proportion of sales from the low-margin consumables category and elevated inventory damages. These were partly offset by higher inventory markups and a reduction in inventory shrink as a percentage of net sales.

Selling, general and administrative expenses, as a percentage of net sales, deleveraged 105 basis points (bps) to 22.9% in the quarter. Operating profit dipped 13.9% to $665.6 million, whereas the operating margin shriveled 162 bps to 7.8% from the year-ago period.

Dollar General has made significant progress, taking its key initiatives forward. Management announced its real estate growth strategies for fiscal 2022, with plans of undertaking 3,000 real estate projects, of which 1,110 will be store openings. The company’s real estate plan targets accelerating the pOpshelf concept, anticipating tripling its store count next year. Driven by the positive performance of the pOpshelf concept, it expects to expand to 1,000 pOpshelf stores by fiscal 2025.

The company also revealed plans to expand its presence internationally for the first time, with a target to open up to 10 stores in Mexico by the end of fiscal 2022.

In the fiscal third quarter, Dollar General repurchased 1.6 million shares for $360 million. The company had $619 million remaining under the authorization at the end of the quarter. DG expects to make share repurchases of $2.4 billion in fiscal 2021.

Dollar General cautioned that there is significant uncertainty related to the severity and duration of the ongoing pandemic, and its impact on the economy, consumer behavior and the business. As a result, it is tough to forecast specific outcomes.

Management said, “In addition, such outcomes could be impacted by several variables, which include, but are not limited to, any additional government stimulus payments, economic recovery, employment levels, COVID-19 vaccine status, further disruptions to the global supply chain, and the ongoing impact of the COVID-19 pandemic, including new variants of concern and any corresponding governmental measures such as closures of schools or businesses, as well as any potential impacts from the recently issued federal vaccination and testing mandate.”

Despite uncertainty related to the pandemic, Dollar General updated its view for fiscal 2021 based on the solid results in the first three quarters.

Here Are 3 Key Stocks for You

Boot Barn Holdings, the lifestyle retailer of western and work-related footwear, apparel and accessories, currently sports a Zacks Rank #1 (Strong Buy). Shares of the company have jumped 179.7% year to date. You can see the complete list of today’s Zacks #1 Rank stocks here.

The Zacks Consensus Estimate for Boot Barn Holdings’ current financial-year sales and earnings per share (EPS) suggests growth of 54.5% and 188.5%, respectively, from the year-ago period’s reported figures. BOOT has a trailing four-quarter earnings surprise of 35.3%, on average.

Tapestry, which provides luxury accessories and branded lifestyle products, flaunts a Zacks Rank #1 at present. TPR has a trailing four-quarter earnings surprise of 29%, on average. Shares of the company have gained 25% year to date.

The Zacks Consensus Estimate for Tapestry’s current financial-year sales and EPS suggests growth of 14.8% and 17.9%, respectively, from the year-ago period’s reported numbers. TPR has an expected EPS growth rate of 12.3% for three-five years.

Target, a general merchandise retailer, currently carries a Zacks Rank #2. TGT has a trailing four-quarter earnings surprise of 19.7%, on average. Shares of the company have risen 36.1% year to date.

The Zacks Consensus Estimate for Target’s current financial-year sales and EPS suggests growth of 14.3% and 39.9%, respectively, from the year-ago period’s reported figures. TGT has an expected EPS growth rate of 14.4% for three-five years.

Here's Why You Should Retain Choice Hotels' (CHH) Stock