Amgen (AMGN) Kyprolis Gets FDA Nod for Use With Darzalex Faspro

Amgen Inc. (AMGN - Free Report) announced that the FDA has granted approval to its multiple myeloma drug, Kyprolis, for use in combination with J&J’s (JNJ - Free Report) Darzalex Faspro (daratumumab and hyaluronidase-fihj).

The latest approval is for Kyprolis in combination with Darzalex Faspro and dexamethasone for the treatment of relapsed/refractory multiple myeloma in adult patients, having received one to three lines of therapy.

Per the company, the FDA approval of Kyprolis in combination with subcutaneous treatment regimen provides increased flexibility and convenience to the given patient population.

Amgen is planning to submit marketing application for Kyprolis to address the given indication across the world.

Please note that Kyprolis is already approved for use in combination with Darzalex plus dexamethasone as well as Bristol-Myers’ (BMY - Free Report) Revlimid (lenalidomide) for the treatment relapsed or refractory multiple myeloma in patientswho have received one to three lines of therapy.

The expansion of the Kyprolis U.S. prescribing information to include Darzalex Faspro plus dexamethasone was based data form the multicenter,open-label phase II PLEIADES study that evaluated the clinical benefit of Darzalex Faspro given in combination with four standard-of-care treatment regimens for treating patients with multiple myeloma.

We note that Kyprolis is one of Amgen’s key revenue drivers. In the first nine months of 2021, Kyprolis recorded sales of $824 million, up 4% year over year, driven by higher unit demand.

Shares of Amgen have declined 12.7% so far this year compared with the industry’s decrease 16.1%. 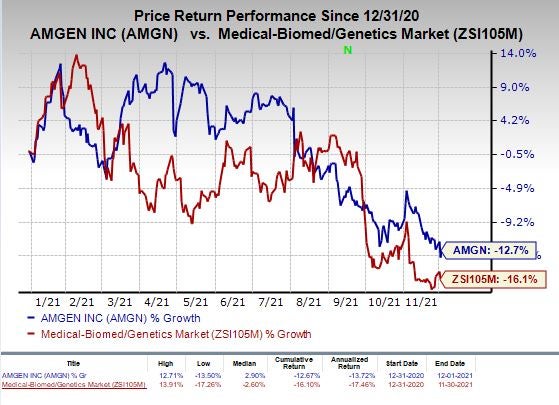 Data from the same showed that treatment with Otezla (30 mg) orally, twice-daily led to a clinically meaningful and statistically significant improvement versus placebo at week 16 – the primary endpoint of measures of genital psoriasis.

Amgen gained rights to Otezla from Celgene (now part of Bristol-Myers) in 2019. The drug generated sales worth $1.6 billion in the first nine months of 2021, reflecting an increase of 3% year over year. A regulatory application seeking approval of Otezla for mild-to-moderate plaque psoriasis is under review in the United States, with a decision expected shortly. Potential label expansion into additional indications should drive sales in future quarters.

Amgen currently carries a Zacks Rank #3 (Hold). A better-ranked stock in the biotech is Sarepta Therapeutics, Inc. (SRPT - Free Report) which has a Zacks Rank #2 (Buy) at present. You can see the complete list of today’s Zacks #1 Rank (Strong Buy) stocks here.