The incident took place near Coolidge, AZ, which unfortunately killed two people and injured one. The rupture on the 30-inch Line 2000 forced Kinder Morganto reduce pressure on the pipeline. As a result, it reduced gas flows to California at a time of greater demand for the fuel. Natural gas flows declined from 0.8 billion cubic feet per day (bcfd) to 0.65 bcfd. Notably, one billion cubic feet is enough gas for 5 million homes per day in the United States.

California is suffering from a severe drought, which has cut power supplies from hydropower facilities, putting the state in a tight position. Wildfires reduced electricity imports from other regions, thereby, forcing the state to rely on gas-fired generation this year. Hence, gas prices, which were already high due to the drought and wildfires, averaged $6.64 per million British thermal units (MMBtu) compared with $4.01 MMBtu in the same period of the previous year.

The incident remained under U.S. National Transportation Safety Board's investigation. Per Reuters, activities were in progress to restore part of the damaged pipeline for limited operation to carry out an inspection on the line, including recently installed pipe.

Shares of the company have underperformed the industry in the past three months. The KMI stock has lost 2.1% compared with the industry's 1.8% decline. 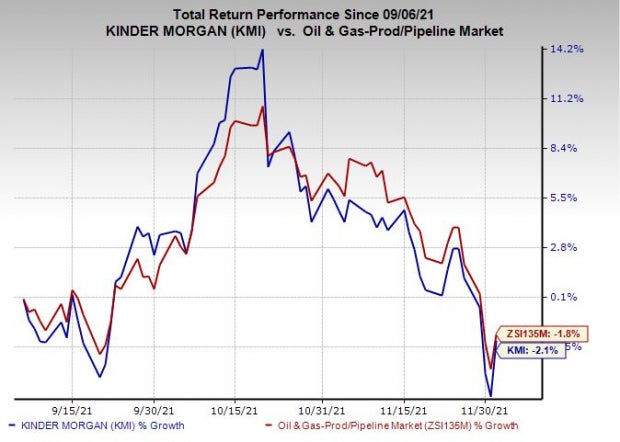 SM Energy Company (SM - Free Report) is one of the most attractive players in the exploration and production space. It engages in the exploration, exploitation, development, acquisition, and production of natural gas and crude oil in North America. SM's operations focus on the Permian basin and the South Texas & Gulf Coast region. It has 443,188 net acres under its possession, of which 33.5% is developed.

In the past year, shares of SM Energy have gained 478.9% compared with the industry's growth of 85.3%. Moreover, SM's earnings for 2021 are expected to surge 708.7% year over year. SM Energy currently has a Zacks Style Score of A for both Growth and Momentum. The upstream energy player beat the Zacks Consensus Estimate thrice in the last four quarters and missed once, with an earnings surprise of 126.3%, on average.

Diamondback Energy, Inc. (FANG - Free Report) , based in Midland, TX, is an independent oil and gas exploration and production company. FANG primarily focuses on the Permian basin, with around 414,000 net acres. The upstream operator focuses on growth through a combination of acquisitions and active drilling in America's hottest and lowest-cost shale region. As of 2020-end, Diamondback held 1,316 million barrels of oil equivalent in proved reserves.

In the past year, shares of Diamondback have gained 130.1% compared with Zacks Exploration and Production Industry's growth of 85.4%. FANG is expected to see an earnings growth of 269.7% in 2021. The company has also witnessed ten upward revisions in the past 30 days. Diamondback's board of directors recently declared a quarterly dividend of 50 cents per share for the third quarter, indicating an 11.1% hike in its quarterly payout from the previous level of 45 cents.

Phillips 66 (PSX - Free Report) is the leading player in each of its operations like refining, chemicals and midstream in terms of size, efficiency and strengths. PSX's operations include processing, transportation, storing, and marketing fuels and products worldwide. Phillips 66 is currently valued at $33.9 billion and offers a quarterly dividend of 92 cents.

PSX is projected to see a year-over-year earnings surge of 547.2% in 2021. It has witnessed three upward revisions in the past 30 days. Phillips 66 beat the Zacks Consensus Estimate three times in the last four quarters and missed once. PSX currently has a Zacks Style Score of A for Value.