Valued at $273.4 million, the contract is scheduled to be completed by November 2022. The aforementioned services will support the Air and Missile Defense Radar as well as Enterprise Air Surveillance Radar.

Majority of the work related to the deal will be performed in Marlborough, MA.

With rapid escalation of geopolitical tensions globally in recent times, developed and developing nations have been boosting their defense arsenal significantly. Radars constitute a vital part of this arsenal.

The demand for military radar systems has expanded manifold in recent times, driven by factors like rise in defense spending of emerging economies, increase in regional tensions and inter-country conflicts that have boosted threats from missiles and aircraft. This in turn has been benefiting radar manufacturing companies like Raytheon, in the form of contract wins, like the latest one.

Last year, Raytheon’s Missile and Defense unit booked some notable contracts involving radars like a $2.43 billion order involving Army Navy/Transportable Radar Surveillance-Model 2 (AN/TPY-2) radar program for the Kingdom of Saudi Arabia along with a $268 million contract for the AN/TPY-2 radar sustainment program. Such notable contract wins along with the latest one boast the revenue growth prospects of the company.

Per Markets and Markets Research, the global military radar market is expected to reach $17.4 billion by 2025 at a CAGR of 4.4% from 2020. Such growth projections for the aforementioned market should benefit prominent radar manufacturers like Raytheon Technologies, Lockheed Martin (LMT - Free Report) , L3Harris Technologies (LHX - Free Report) and Northrop Grumman (NOC - Free Report) .

Interestingly, Lockheed reported third-quarter 2021 adjusted earnings of $6.66 per share, which surpassed the Zacks Consensus Estimate by a whopping 239.8%. The company expects to generate earnings of $27.17 during 2021, reflecting an improvement from its prior guidance level. LMT’s shares have gained 15.3% in the past three years.

L3Harris’ third-quarter 2021 adjusted earnings came in at $3.21 per share, which surpassed the Zacks Consensus Estimate by 1.6% and also increased 13% from the year-ago quarter. LHX’s shares have the gained 51.8% in past three years.

Interestingly, Northrop reported third-quarter 2021 earnings of $6.63 per share, which surpassed the Zacks Consensus Estimate by 11.8% and increased 13% year over year. NOC’s shares have gained 41.1% in the past three years.

The company’s shares have gained 10.5% in the past year against the industry’s decline of of 0.7%. 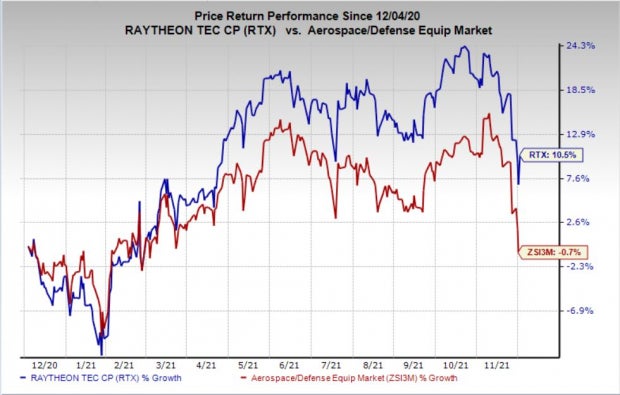