The company continues to gain from robust digitalization. During the coronavirus pandemic, the company has been focusing on drive-thru, delivery & take-away. Prior to the coronavirus crisis, drive-thru accounted for about two-thirds of all sales in the United States. Despite reopening of dining rooms, the company stated that drive-thru sales in its top six markets continue to remain strong compared to the pre-pandemic level.

The company informed that more than 80% of its restaurants across 100 markets globally provide delivery. In the United States, 95% of its restaurants offer drive-thru facility. Over the past year, delivery sales mix has doubled in Australia, Canada and the United States. It announced that across its major six markets, digital sales crossed $10 billion or nearly 20% of system-wide sales in 2020. Year-to-date, the company recorded approximately $13 billion in digital sales in its top six markets.

The Zacks Rank #3 (Hold) company continues to impress investors with robust comps growth. In third-quarter 2021, global comps advanced 12.7% against a decline of 2.2% in the prior-year quarter. This marks the third consecutive quarter of comps growth after reporting a decline in the preceding four quarters. In the third quarter, comps at the United States, international operated markets and international developmental licensed segment rose 9.6%, 13.9% and 16.7%, respectively. Japan and Latin America posted robust comps growth. 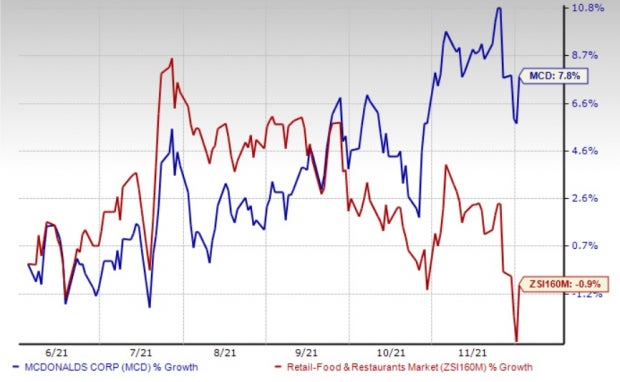 McDonald’s results in the coming quarters are likely to reflect the impacts of the coronavirus pandemic. Although the company has reopened most of its restaurants, it might witness dismal traffic due to concerns stemming from the Omicron variant. The company continues to monitor the resurgence of coronavirus cases worldwide. Although the company has reopened roughly 80% of its dining rooms in the United States, nearly 3,000 dining rooms remain closed in high risk COVID areas.

Although overall comps have increased sharply, it is still below the pre-pandemic level in a few markets. In third-quarter 2021, comps in the China market were negative. Softening economy and resurgence of COVID-19 have negatively impacted comps in China.

Papa John's has reported better-than-expected earnings in three of the trailing four quarters, the average surprise being 27.2%. The company’s fiscal 2021 earnings is likely to witness growth of 138.6%. PZZA stock has gained 48.2% in the past year. You can see the complete list of today’s Zacks #1 Rank (Strong Buy) stocks here.

Del Taco Restaurants, Inc. has a Zacks Rank #2. The company has a trailing four-quarter earnings surprise of 25.7%, on average. Shares of the company have gained 3.3% in the past three months.

Kura Sushi USA, Inc. (KRUS - Free Report) carries a Zacks Rank #2. The company has a trailing four-quarter earnings surprise of 15.6%, on average. Shares of the company have soared 225.1% in the past year.

The Zacks Consensus Estimate for Kura Sushi’s current financial-year sales and EPS suggests growth of 108% and 85.7%, respectively, from the year-ago period’s levels.