Alphabet’s (GOOGL - Free Report) division Google is consistently working toward adding new features to YouTube Music in a bid to strengthen its offerings in the music streaming space.

Reportedly, YouTube Music has added a capability by which users can save queues as playlists.

To avail this feature, users first need to add songs or albums to their queue and select the “UP NEXT” option on the Now Playing screen. Then they can click on the “Playing from” header option, which consists of the current playlist or album. Following that, users can get the “Add to playlist” pop-up for saving their queue to an existing collection or by creating a new one.

Currently, the feature is available to only a few selected Android users.

The recent feature will help Google deliver an enhanced music streaming experience, which in turn is likely to boost the adoption rate of YouTube Music. This is likely to benefit the company’s financial performance in the near term, which will further help it in winning customer confidence.

GOOGL has gained 62%, outperforming the industry’s growth of 36.6% on a year-to-date basis. 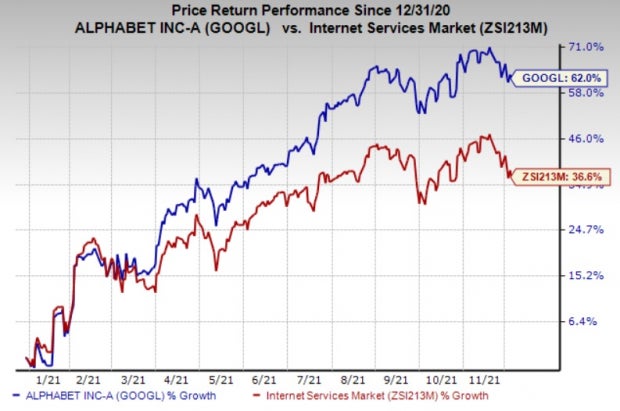 Apart from the latest move, the company recently rolled out its “Recent Played” and “Turntable” widget to Android users.

Further, it rolled out the background listening feature for YouTube Music in Canada to provide an enhanced music experience to users in the country.

With these recent efforts, Google has positioned itself well to rapidly penetrate the booming global music streaming market.

The market has been witnessing a significant rise due to an increase in mobile advertisement spending, use of mobile apps, rise in the number of subscription services and users’ accessibility to local content on music streaming platforms.

According to a report by Allied Market Research, the online music streaming industry is expected to reach $24.7 billion by 2027, progressing at a CAGR of 9.8% between 2021 and 2027.

In addition, a report by ResearchAndMarkets.com reveals that the global music streaming market is expected to hit $7.5 billion by 2025, witnessing a CAGR of 19% during the forecast period of 2021-2025.

Amazon is gaining strong momentum in the music streaming market on the back of its expanding global footprint. Recently, itrolled out Amazon Music in Columbia and Chile, by which music fans in both the countries can access its premium music subscription service,Amazon Music Unlimited.

Nevertheless, YouTube Music’s growing efforts toward expanding its features are expected to continue giving tough competition to the abovementioned peers.