Valued at $77.9 million, the contract is expected to be completed by December 2025. Per the terms of the deal, Lockheed will conduct the integration of indigenous weapons into an F-35 jet-air system.

Work related to this contract will be carried out in Fort Worth, TX.

The F-35 program enjoys a solid demand worldwide, as evidenced by its eight international program partners — the United States, the U.K., Italy, the Netherlands, Australia, Norway, Denmark and Canada. Additionally, it has six foreign military sales customers that are procuring and operating the F-35, namely Israel, Japan, South Korea, Poland, Belgium and Singapore. This reflects the growing importance of this family of jets globally.

As a result, Lockheed enjoys a consistent inflow of contracts for the production, delivery of associated spare parts as well as other deals concerning the F-35 jet program. For instance, in September 2021, the company clinched annualized contracts worth $6.6 billion for fiscal years 2021-2023, involving the sustainment of its global F-35 fleet, from the F-35 Joint Program Office. The contract also requires the company to build enterprise capacity for supporting the future fleet of more than 3,000 F-35 jets.

Such contract wins, including the latest one, are expected to boost Lockheed Martin's top-line performance in the days ahead.

Boeing incurred an adjusted loss of 60 cents per share in third-quarter 2021, which came in much wider than the Zacks Consensus Estimate of a loss of 17 cents. BA stock has risen 33.5% in the past five years.

Textron reported third-quarter 2021 adjusted earnings of 85 cents per share, which exceeded the Zacks Consensus Estimate of 75 cents by 13.3%. TXT stock has gained 52.3% in the past five years.

Shares of Lockheed Martin have lost 5.4% in the past year compared with the industry's decline of 36.2%. 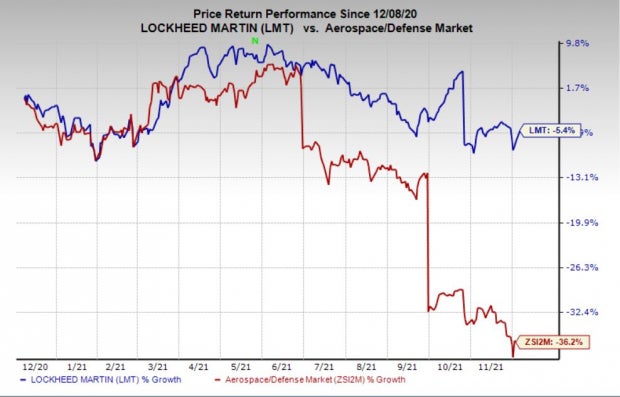