1. Nissan unveiled Nissan Ambition 2030, the firm’s long-term vision to drive the new age of electrification, and empower mobility and beyond. To this end, the company plans to invest around $17.6 billion over the next five years to accelerate the electrification of its product lineup. NSANY intends to launch 23 electrified models by the decade-end, 15 of which would be fully electric.

Nissan is aiming at a 50% electrification mix for its namesake and Infiniti brands by 2030. The auto biggie expects EVs to account for nearly 70% of U.S. sales by 2040. On the battery front, NSANY plans to introduce its proprietary all-solid-state batteries by fiscal 2028, with a pilot plant in Yokohama to be readied as early as fiscal 2024.

2. General Motors inked a non-binding agreement with South Korea-based POSCO Chemical to form a joint venture to construct a factory in North America. Per the deal, the new facility will process Cathode Active Material (CAM) for GM’s Ultium platform. The plant is scheduled to open in 2024 and is expected to create hundreds of employment opportunities.

The new facility in North America will supply most of the CAM required by General Motors’ Ultium cell facilities under construction in Ohio and Tennessee, and two more U.S-based Ultium battery cell plants planned by mid-decade. Acceleration of the production of batteries and their materials will help GM fortify its U.S. manufacturing foothold of Ultium batteries, bring down the cost of EVs, and in turn speed up the domestic adoption of EVs.

3. Tesla suggested plans of investing approximately 1.2 billion yuan ($188 million) for ramping up production at the Shanghai Gigafactory in China. The expansion plan comes at a time when the factory is nearing exhaustion of the current capacity. A filing on the Shanghai government's platform for companies' environmental information disclosures revealed the EV behemoth’s plans to outlay cash for expanding production lines. The upgrade will take place within the plant's existing production area.

4. Stellantis inked a five-year deal with lithium developer Vulcan Energy Resources Ltd to supply battery-grade lithium hydroxide in Europe. Per the agreement, Vulcan will supply between 81,000 and 99,000 metric tons of lithium hydroxide to Stellantis for use in EVs during the five-year tenure of the deal. Shipments are scheduled to begin in 2026.

The latest deal is a win-win for both Stellantis and Vulcan in achieving their shared sustainability and decarbonization ambitions. For Vulcan, the deal is in sync with its mission to decarbonize the lithium-ion battery and EV supply chain. The proximity of its location to Stellantis’ European gigafactories will also aid the company in reducing the transport distance of lithium chemicals. For Stellantis, the deal forms part of its long-term electrification strategy, per which the automaker has committed to invest more than 30 billion euros ($35.54 billion) by 2025 in software development and electrification of its vehicle lineup.

5. Li Auto reported better-than-expected results for third-quarter 2021. The rising EV star of China broke even in the quarter versus the Zacks Consensus Estimate of loss of a penny per ADS and a loss of 8 cents per share incurred in the year-ago period. Revenues of $1.21 billion comprised $1.15 billion (up 200% year on year) from vehicle sales and $60.4 million (up 745.1% year over year) from other sales and services. Deliveries of Li ONEs totaled 25,116 in the quarter under discussion, up a whopping 190% year over year. 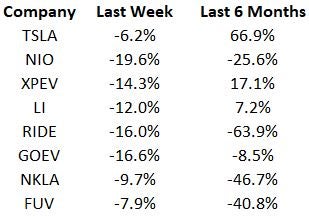