Shares of United Bankshares, Inc. (UBSI - Free Report) gained 5.2% following the announcement of the completion of the merger deal with Community Bankers Trust Corporation. This June, United Bankshares entered an all-stock deal to acquire Community Bankers, the parent company of Essex Bank. Both companies were expected to collaborate in a transaction valued at $303.3 million.

The buyout has brought together two high-performing banking companies, and bolsters United Bankshares' position as one of the largest and best-performing regional banking companies in the Mid-Atlantic and Southeast. Moreover, the combined entity will now operate across 250 locations in opportunistic markets in the United States. With $29 billion in assets, the combined company now ranks as the 41st largest banking company in the nation, based on market capitalization.

Richard M. Adams, the chairman and CEO of United Bankshares, stated, "We are extremely pleased to have Community Bankers Trust joining United. We have been looking forward to the opportunity to broaden our footprint throughout Virginia and Maryland, and this transaction will allow us to enhance our presence in some of the most desirable banking markets in the nation."

Former Community Bankers president and CEO, Rex L. Smith III, said, "We are excited to become a part of the United Bank family. Our organizations' similar cultures and values will be a great benefit to our customers, employees, and shareholders. United will provide the products and technology to meet the needs of individuals and businesses in our community, while preserving relationship-based banking and local decision-making."

Over the last six months, shares of United Bankshares have lost 4.4% compared with the 2.8% decline of the industry. 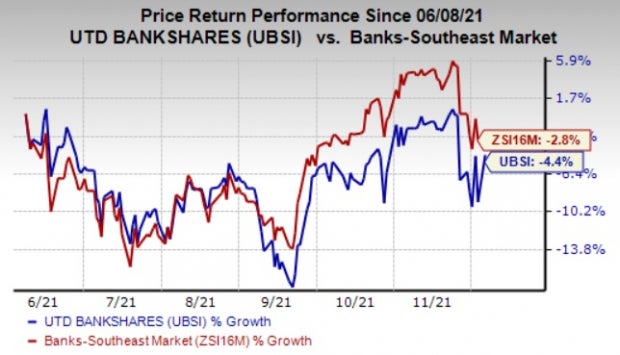 Last month, CVB Financial Corp. (CVBF - Free Report) , the holding company for Citizens Business Bank, announced that Citizens received regulatory approvals from the Federal Deposit Insurance Corporation, and the California Department of Financial Protection and Innovation to complete its previously announced merger agreement with Suncrest Bank. The stock-and-cash deal worth $204 million, announced this July, is expected to close on or about Jan 7, 2022, subject to the satisfaction of all remaining closing conditions.

In an effort to expand its presence, CVBF announced an agreement and plan of reorganization and merger, according to which Suncrest bank would merge with and into Citizens. The acquisition is the second-largest in CVB Financial's history.

SEI Investments' chairman and CEO, Alfred P. West, Jr., stated, "The financial services landscape is ever-evolving. Our markets continue to face an unprecedented pace of change, and we continuously seek opportunities to stay ahead of and manage this change. By making strategic investments in our solutions and workforce, we drive growth and help our clients make confident decisions for their futures."