Jack in the Box Inc. (JACK - Free Report) recently reached an agreement to buy Del Taco Restaurants, Inc. , the nation’s second largest Mexican QSR chain by number of restaurants. The move is in sync with its strategy of expanding the customer base.

Jack in the Box has agreed to pay $12.51 a share in cash for Del Taco, which reflects a premium of 66% over the closing price on Dec 3. The deal is valued at $575 million, including existing debt. The deal is expected to be completed in the first quarter of 2022.

Del Taco Buyout: A Move to Boost Customer Base

Del Taco, which has nearly 600 restaurants, serves more than three million guests every week. Following the deal, together the companies have more than 2,800 restaurants in 25 states with similar guest profiles, menu offerings and company cultures. It is worth mentioning that 99% of the Del Taco restaurants have drive-thru, which helps the company in achieving robust off-premise sales.

Darin Harris, CEO of Jack in the Box said, “This is a natural combination of two like-minded, challenger brands with outstanding growth opportunities. Together, Jack in the Box and Del Taco will benefit from a stronger financial model, gaining greater scale to invest in digital and technology capabilities, and unit growth for both brands.”

Jack in the Box anticipates the deal to be accretive to earnings per share (excluding transaction expenses) in mid-single-digit in one year. In the second year, the company expects meaningful accretion of earnings once full synergies are realized.

The acquisition will enable Jack in the Box to tap the robust Mexican QSR category, where Del Taco is a major brand with a track record of steady performance. The transaction will also aid Jack in the Box to accomplish its long-term target of 4% annual unit growth by 2025.

Jack in the Box estimates that the deal values Del Taco at a synergy adjusted multiple of nearly 7.6x trailing 12 months adjusted EBITDA. By the end of 2023, it anticipates realizing run-rate cost synergies of roughly $15 million. The deal will drive Jack in the Box’s top line.

Jack in the Box carries a Zacks Rank #3 (Hold). Shares of the company have fallen 23.1% in the past three months, compared with the industry’s decline of 6.6%. 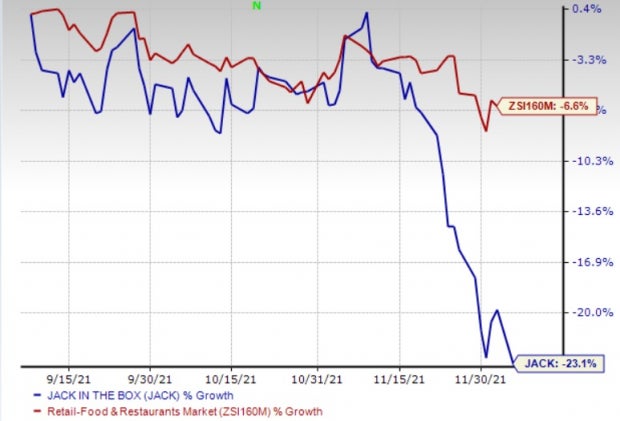 Papa John's fiscal 2021 earnings is likely to witness growth of 138.6%. PZZA stock has gained 53% in the past year. You can see the complete list of today’s Zacks #1 Rank (Strong Buy) stocks here.

The Zacks Consensus Estimate for Noodles & Company’s current financial year sales and EPS suggests growth of 22.5% and 196.6%, respectively, from the year-ago period. Shares of the NDLS have surged 30.1% in the past year.

Here's How Costco (COST) is Placed Ahead of Q1 Earnings