Details of the Agreement

Per the agreement, JinkoSolar will provide nearly 4 million photovoltaic modules in  2022,  which is equivalent to 2 gigawatt (GW) of installed power. The deal provides a platform for JinkoSolar to further commercialize its Tiger Pro family of panels in the Brazil market.

Benefits of the Agreement

Apart from its well-established market in China, JinkoSolar has been consistently gaining from its deployment of solar modules spread across more than 10 countries. The aforementioned DG agreement, which is one of the largest ever signed by Jinko Solar Co. Ltd outside China, solidifies its presence in Brazil.

Moreover, the market share of 31% of Aldo Solar in the Brazilian solar market will aid JinkoSolar in capitalizing on the rapidly growing solar market of the country. It is worth mentioning here that JinkoSolar anticipates doubling its business volume primarily in the distributed generation operation in 2022. The latest agreement will surely take JinkoSolar a step closer to achieving this target. This, in turn,is likely to boost its overall top-line performance in the days ahead.

Additionally, Brazil solar market prospects are expected to expand manifold. Increased penetration of the solar market in the region coupled with favorable conditions for the same provides ample growth opportunities for solar companies like Jinko Solar. According to a Mordor Intelligence report, the Brazilian Solar market is expected to witness a CAGR of 5.5% during the 2021-2025 period.

JinkoSolar, being one of the largest manufacturers of solar modules, stands to gain a lot from the opportunities present in Brazil.

Considering the robust growth prospects in the Brazilian solar market, other solar companies have also undertaken initiatives to tap the same.

For instance,in September 2021,Enphase Energy (ENPH - Free Report) launched its IQ 7+ microinverters in the solar market of Brazil. Per the company’s expectations, shipping of these microinverters is likely to have commenced in October 2021.

Interestingly, Enphase Energy’s Zacks Consensus Estimate for 2021 earnings has been revised upward by 16.5% to $2.26 per share in the past 60 days. The long-term earnings growth rate for ENPH’s earnings is pegged at 38.50%. Impressively, shares of Enphase Energy have appreciated 64.7% in the last one year.

Canadian Solar’s long-term earnings growth rate is pegged at 12%. The company’s shares have lost 17.6% in the past one year.

In 2019, SolarEdge Technologies (SEDG - Free Report) announced its expansion in the Brazil PV market with the introduction of three phase inverters with synergy technology up to 100kW (kilowatt-peak) that fit the 127/220, 220/380 and 277/480 grid types.

SolarEdge’s long-term earnings growth rate is pegged at 17.70%. The stock has gained 8% in the past year.

In a year’s time, shares of JinkoSolar have lost 28.9% compared with the industry’s decline of 13.5%. 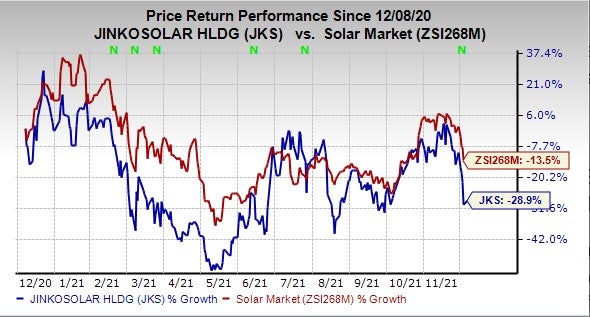