The study met its co-primary endpoints by demonstrating statistically significant improvement over placebo in the Rett syndrome behavior questionnaire and the clinical global impression of progress. Also, treatment with trofinetide led to statistically significant improvement versus placebo in CSBS-DP-IT–Social, caregiver scale of ability to communicate – a key secondary endpoint.

The company is planning to hold a pre-NDA meeting with the FDA in the first quarter of 2022 and expects to file a new drug application or NDA for trofinetide to treat Rett syndrome around mid-2022.

Shares of ACADIA were up 3.3% in after-hours trading on Monday following the announcement of the news. The stock was also up in pre-market trading on Tuesday. ACADIA's stock has plunged 63.7% so far this year compared with the industry’s decline of 21.7%. 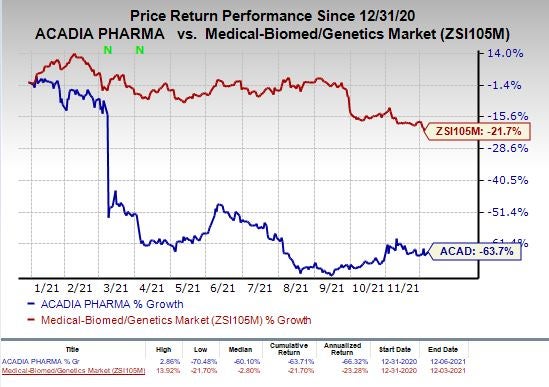 We note that, in 2018, ACADIA entered into a license agreement with Australian biopharmaceutical company, Neuren Pharmaceuticals Limited, and obtained exclusive North American rights to develop and commercialize trofinetide for Rett syndrome and other indications

The FDA has granted a Rare Pediatric Disease designation to trofinetide for the treatment of Rett syndrome. Currently, there is no approved medicine for the given indication.

If successfully developed and upon potential approval, trofinetide can lend a significant boost to the company and lower its sole dependence on Nuplazid for revenues.

We remind investors that, presently, ACADIA’s top line solely comprises sales of its only marketed drug, Nuplazid (pimavanserin), in the United States. The drug is approved for the treatment of hallucinations and delusions associated with Parkinson’s disease psychosis.

Axsome has submitted an NDA for AXS-05 to treat major depressive disorder. Also, a similar filing for AXS-07 as an acute treatment of migraine is under review, with a decision expected in April 2022.

Earnings of Sarepta Therapeutics have surpassed estimates in two of the trailing four quarters and missed the same on the other two occasions.

Editas Medicine’s earnings have surpassed estimates in two of the trailing four quarters and missed the same on the other two occasions.