Coal Prices Keep Rising: Can You Exploit Them?

Coal isn’t a space where people would want to put their money for the long term because countries all over the world are working toward a cleaner future, which of course means no coal. Significantly, the change won’t happen overnight.

So while capacity will continue to be pared down, there will be a gap in consumption until clean energy can fill that gap. This is not an easy job considering the fact that the global population continues to increase and that the modern growth-oriented economy requires continued increase in production and consumption.

So coal is essentially a market where supply will continue to tighten as companies pull back capacity. Demand on the other hand will be relatively inelastic and dependent on the amount of alternative energy available to fill the gap. Additionally, the lack of long-term prospects means an absence of new entrants to increase competition and thereby, keep prices in check. As a result, coal prices are likely to remain relatively strong.

Coal has two major uses. The first is its use in the blast furnaces that smelt iron ore and other components. It’s part of the steel production process. Other metals may also be smelted this way. This use case is called metallurgical coal.

The other use of coal is in electric power plants for energy generation and it is referred to as thermal coal.

Over 90% of the coal produced in the U.S. is used in thermal power plants. And this is where we have a tight situation this year. A number of factors, related to events all over the world, have contributed to the tightness.

In Europe mainly and also in the U.S. there was a particularly hot summer, which increased electricity consumption and reduced energy inventories (oil, coal, natural gas and wind). Production hasn’t kept up with this, mainly because the post-pandemic surge in production didn’t permit.

The two largest coal producers, China and India, were also rebounding from the pandemic, thus increasing demand. At the same time, China, the largest producer and consumer of the fuel, introduced reforms limiting production at smaller miners on safety concerns. Indonesia, the biggest exporter, saw production disruptions due to heavy rainfall, and then the government temporarily suspended exports from 34 suppliers for not fulfilling domestic obligations.

The second largest coal producer, Australia, cut back capacity and personnel during the pandemic and weren’t in any hurry to add back. All this added up to a situation where already-shrinking coal supply was further hit by various factors even as demand increased manifold.

So while this is not an attractive market for long-term investing, is seems extremely unlikely that coal demand will completely melt away in the next decade. Even if the domestic market softens due to ample supply of alternatives (something that doesn’t seem at all likely before this time), demand from Asian countries will take longer to diminish.

In the meantime, this is a segment of the market that is likely to benefit from sustained price increases (Central and North Appalachia coal prices are up a respective $2.75 and $2.20 over the past week EIA estimates).

One of the largest coal producers in the United States, Arch Resources operates nine mines across the major coal basins of the country. At 2020-end, the company had 886.4 million tons of recoverable coal reserves.

After growing its revenues 49.4% this year, Arch Resources is set to grow another 23.7% in 2022. Earnings growth in 2022 is expected to be 93.5%, coming on top of 191.5% growth this year. So you can clearly see the effect of those escalating prices on revenue, margins and profits.

Arch Resources currently trades at 2.16X, which is way below its median level of 8.35X over the past year, as well as the S&P 500’s 21.19X. So the shares appear to be worth considering.

The Zacks Consensus Estimate for Warrior’s 2022 earnings has jumped $1.82 (41.5%) in the last 30 days. Estimates have been rising consistently over the past 90 days.

Warrior trades at 3.79X earnings, below its median level of 9.94X over the past year, which makes the shares really cheap.

Yanzhou mines prime quality, low-sulfur coal from its mines in Shandong Province, China and is one of China's largest coal producers and coal exporters. Based on coal output per production employee, the company is one of the most efficient underground coal mining enterprises in China.

Based on estimates from a single analyst, Yanzhou will grow its revenue 146.0% this year but will see a 25.7% drop in the next. It is still early to start estimating 2022 sales, especially since there is only one analyst providing estimates. However, it’s worth noting that the estimate revisions trend is encouraging. Accordingly, the 2022 estimate increased 32 cents (10.3%) in the last 60 days.

Yanzhou trades at 5.09X earnings, above its median level of 4.74X and annual high of 6.90X. Further upside may be possible, especially considering the upward trajectory in earnings estimates.

SunCoke produces metallurgical coke at its facilities in the U.S. and Brazil.

Analysts currently expect its 2022 revenue and earnings growth to drop off in 2022. But we’ll have to wait and see, given the positive dynamics in the industry.

At 11.36X earnings, SunCoke shares look cheap compared to their median value of 12.56X over the past year and also the S&P 500. 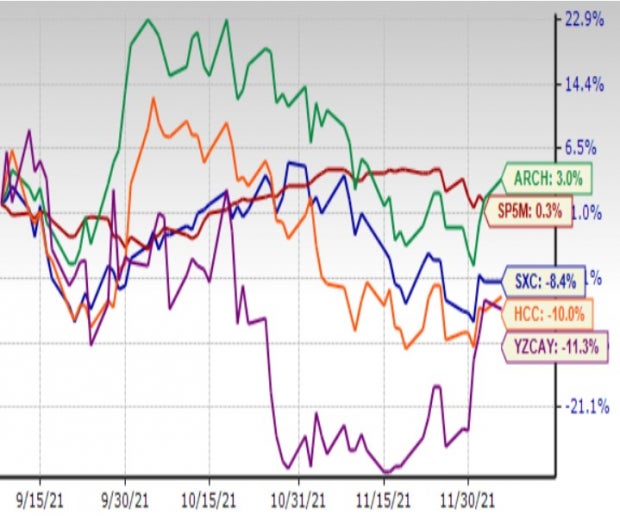