The biotech sector has been in focus over the past week with pipeline and regulatory updates. Meanwhile, the emergence of the Omicron SARS-CoV-2 variant has again put the spotlight on treatments for the disease.

ACAD Surges on Study Results: Shares of Acadia Pharmaceuticals Inc. (ACAD - Free Report) surged after the company announced positive results from a late-stage study on trofinetide.   In the phase III Lavender study, Acadia evaluated the efficacy and safety of trofinetide in 187 girls and young women aged 5-20 years with Rett syndrome, a rare, debilitating neurological disorder. Trofinetide met co-primary efficacy endpoints demonstrating statistically significant improvement over placebo in the Rett Syndrome Behaviour Questionnaire (RSBQ) and the Clinical Global Impression of Improvement (CGI-I). Trofinetide met key secondary endpoint demonstrating statistically significant improvement over placebo in CSBS-DP-IT–Social, caregiver scale of ability to communicate. Acadia is preparing for a pre-NDA meeting with the FDA in the first quarter of 2022 and plans to submit a new drug application (NDA) around mid- 2022.  The candidate was granted Fast Track Status and Orphan Drug Designation for Rett syndrome. An NDA with Orphan Drug Designation is eligible for priority review.

Based on these results, combined with the prior positive phase II/III results, Biohaven plans to file a new drug application for zavegepant with the FDA in the first quarter.

The FDA has set a target action date of Mar 27, 2022.  In addition, the European Medicines Agency (“EMA”) has validated the type II variation for Reblozyl in NTD beta thalassemia.   These applications from Bristol Myers were based on safety and efficacy results from the phase II BEYOND study evaluating Reblozyl plus best supportive care in patients with NTD beta thalassemia.

Vir and Glaxo’s Antibody Update: Vir Biotechnology, Inc. (VIR - Free Report) and Glaxo announced that preclinical studies demonstrate that sotrovimab retains activity against the full combination of mutations in the spike protein of the Omicron SARS-CoV-2 variant. Sotrovimab is an investigational SARS-CoV-2 neutralizing monoclonal antibody. The preclinical data was generated through pseudo-virus testing of the combined known mutations of the Omicron variant, which included the maximum number of changes (37 mutations) identified to date in the spike protein. Last week, the companies announced that the preclinical data generated through pseudo-virus testing showed sotrovimab retained in vitro activity against key individual mutations of the Omicron variant, including those found in the binding site of sotrovimab.

Vir and Glaxo recently submitted the Marketing Authorization Application to the EMA for sotrovimab under the brand name Xevudy for the treatment of adults and adolescents (aged 12 years and over and weighing at least 40kg) with COVID-19 who do not require oxygen supplementation and who are at risk of progressing to severe COVID-19.

The Nasdaq Biotechnology Index has lost 1.93% in the past four trading sessions. Among the biotech giants, Moderna has lost 19.88% during the period. Over the past six months, shares of Moderna have soared 28.59%. (See the last biotech stock roundup here: Biotech Stock Roundup: VRTX, AMGN's Pipeline Updates, BPMC's Acquisition & More) 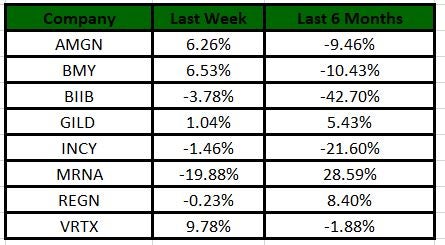