Intel Remains a Hold After Mobileye IPO News, but Some Peers Look Good

Intel Corporation (INTC - Free Report) has finally decided to unlock some value for shareholders with an IPO of Mobileye, the leading provider of advanced driver-assistance systems (ADAS) and autonomous driving solutions.

Back in 2017, Intel paid around $15 billion for the Israel-based company. Since then, it has helped the team develop leading driver assistance technology with numerous automotive design wins. The new company will include Intel’s Moovit acquisition, as well as the Intel teams working on lidar and radar development and other Mobileye projects.

Intel will retain a majority stake in the company and continue to collaborate on the development of leading sensor technology. The independence of the unit may also help attract customers (Mobileye has continued to use TSMC facilities rather than Intel’s).

Mobileye’s auto relationships (it has 41 new ADAS wins with more than 30 leading automakers worldwide) will help Intel tap the semiconductor opportunity in the automotive sector. The company currently expects that the share of semiconductors in the premium automotive bill of materials (BOM) will be 20% by 2030.

The auto opportunity has really grown in recent times, as automakers race toward EVs to meet climate goals and increasingly, toward autonomous cars (AVs) for safety and improved cost-of-ownership.

The collaboration has been very good for Mobileye so far, “nearly tripling annual chip shipments, revenue and the number of employees,” according to founder Anmon Shashua, who will remain on its board. Intel expects Mobileye’s revenue to grow 40% this year.

While investors responded positively to the news, there’s no denying that Intel has a lot of ground to cover, having lost its process lead and product edge to competitors. New CEO Pat Gelsinger is under some pressure to put the company back on track. And it won’t be easy. Or quick.

However, some other stocks in the Zacks-classified Semiconductor-General industry do look good right now.

Kyoto, Japan-based SCREEN Holdings reports every six months. In the previous six-month period ending September, the company saw revenue growth of 31.2% and operating income growth of 271.2% from the comparable prior-year period. While the demand strength is broad-based across its semiconductor, graphics arts, display and coater, and PCB equipment businesses, not all of it is related to pandemic-related bounce back (SCREEN’s revenue dropped just 3.7% in the same period last year while its earnings grew 88.6%).

The couple of analysts providing estimates on SCREEN Holdings currently expect its 2022 (ending March) revenue to grow 24.6% and 2023 revenue to grow 8.6%. Earnings for the two years are expected to grow a respective 99.1% and 18.7%.

Next on the list is Zacks #2 (Buy)-ranked NVIDIA Corp. (NVDA - Free Report) , which is the worldwide leader in visual computing technologies and the inventor of the graphic processing unit, or GPU. Over the years, the company’s focus has evolved from PC graphics to artificial intelligence (AI) based solutions that now support high performance computing (HPC), gaming and virtual reality (VR) platforms.

NVIDIA is seeing rapid adoption of its technology in the gaming market where its stream of new products has encouraged developers. It is already the favorite in the data center market, and this position should strengthen with the Mellanox acquisition. As businesses increasingly take to the cloud and individuals increasingly connect from different locations (particularly post-COVID), data center demand has gone up considerably. NVIDIA’s products also used for the development of artificial intelligence, and machine learning systems in various industries, particularly automotive run on its technology.

STMicroelectronics (STM - Free Report) is another player in this industry with a Zacks #2 rank. It designs, develops, manufactures and markets a broad range of semiconductor integrated circuits and discrete devices used in a wide variety of microelectronic applications, including telecommunications systems, computer systems, consumer products, automotive products and industrial automation and control systems.

STMicroelectronics is seeing broad-based increase across most product groups with improved efficiencies and utilization driving its profitability. 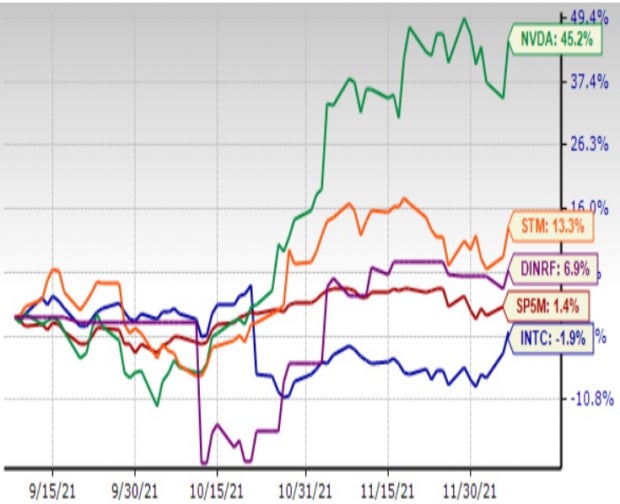