First Financial Bancorp. (FFBC - Free Report) agrees to acquire the fourth-largest independent equipment financing platform in the United States, Summit Funding Group. The completion of the deal, subject to customary closing conditions, is expected in the fourth quarter of this year.

First Financial has an excellent record of strategically deploying excess capital to buy and, thus, grow additive specialty lines of business in a disciplined manner. The buyout of Summit will complement the strategy.

Archie Brown, First Financial's president and CEO, stated, "We are very excited to join forces with one of the most widely respected companies in the equipment finance sector. In combining the scale and product breadth of First Financial with Summit's leading nationwide position in the equipment finance sector, we are ideally situated to capitalize on a significant growth opportunity."

Brown added, "As an existing banking partner of Summit, our intimate understanding of the business and management team gives us a high degree of confidence that our combined value proposition will resonate in the market."

Summit's founder and CEO, Rick Ross, said, "With First Financial, we are joining a like-minded partner who is well-positioned to assist Summit in unlocking significant growth, while enhancing profitability through immediate funding synergies and sharing a commitment to credit performance excellence."

Upon the deal closure, Summit will become a subsidiary of First Financial Bank. The current leadership of Summit will continue their positions.

Over the past six months, shares of First Financial have lost 5.7% compared with the 5.8% decline of the industry. 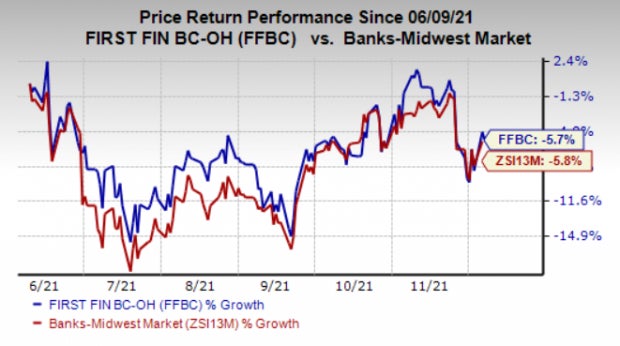 The buyout has brought together two high-performing banking companies, and bolsters United Bankshares' position as one of the largest and best-performing regional banking companies in the Mid-Atlantic and Southeast. The combined entity will now operate across 250 locations in opportunistic markets in the United States.

Last month, CVB Financial Corp. (CVBF - Free Report) , the holding company for Citizens Business Bank, announced that Citizens received regulatory approvals from the Federal Deposit Insurance Corporation, and the California Department of Financial Protection and Innovation to complete its previously announced merger agreement with Suncrest Bank. The stock-and-cash deal worth $204 million is expected to close on or about Jan 7, 2022, subject to the satisfaction of all remaining closing conditions.

In an effort to expand its presence, CVBF announced an agreement and plan of reorganization and merger in July, according to which Suncrest bank would merge with and into Citizens. The acquisition is the second-largest in CVB Financial's history.