Ryanair Holdings (RYAAY - Free Report) and Gol Linhas (GOL - Free Report) posted upbeat traffic statistics for November as air-travel demand continues to improve, courtesy of increased vaccinations. Ryanair is looking to expand its network, courtesy of increased demand despite the omicron scare. In line with this objective, RYAAY announced plans to open a new base in Madeira, Portugal during summer 2022. The story was covered in detail in the previous week’s roundup.

1. At American Airlines, Parker will be replaced as CEO by its current president Robert Isom. Isom has been serving as the carrier’s president since 2016. He is hugely experienced in the airline industry, reflected in his leadership expertise across various fields like finance, operations, planning, marketing, sales, alliances, pricing and revenue management. With air-travel demand on the mend from the pandemic-led pits witnessed last year, American Airlines will be hoping that a veteran like Isom will be able to leverage the upbeat scenario and guide AAL in its quest for achieving more growth.

2. In line with its efforts to decarbonize the airline industry in the United States, United Airlines flew an aircraft full of passengers using only SAF in one of its two engines. The fuel was supplied by World Energy, North America's only commercial biofuel producer. The plane took off from Chicago’s O’Hare International Airport and landed at Washington, D.C.’s Reagan National Airport on Dec 1. For future flights, UAL agreed to buy 1.5 billion gallons of SAF from Alder Fuels, which is enough to fly 57 million passengers. UAL can also buy up to 900 million gallons of additional SAF from Fulcrum BioEnergy.

3 By virtue of its agreement with Viva Aerobus, Allegiant intends to offer cheaper non-stop leisure travel between the United States and Mexico from the first quarter of 2023, post regulatory approval. The alliance is not only the first such venture for Allegiant and Viva Aerobus, but is also the first-of-its-kind in the airline industry between two ultra-low-cost carriers. The carriers submitted a joint application to the US Department of Transportation requesting approval and antitrust immunity for the alliance. Since Allegiant does not currently serve Mexico, through this alliance, its primary focus will be to broaden travel offerings to tourist-favorite Mexican destinations like Cancun, Los Cabos and Puerto Vallarta.

4. With air-travel demand improving, courtesy of increased vaccination, November traffic surged more than 100% year over year at Ryanair to 10.2 million. Load factor (percentage of seats filled with passengers) in November 2021 was 86% compared with 62% in November 2020. RYAAY operated more than 62,300 flights last month.

5. At Gol Linhas, November traffic and capacity increased 17.1% and 20.4%, respectively, year over year. Since traffic growth was less than capacity expansion, load factor deteriorated 2.3 percentage points to 82.1% last month. With steady improvement in travel demand in Brazil, traffic climbed 9.4% year over year in the first 11 months of 2021. 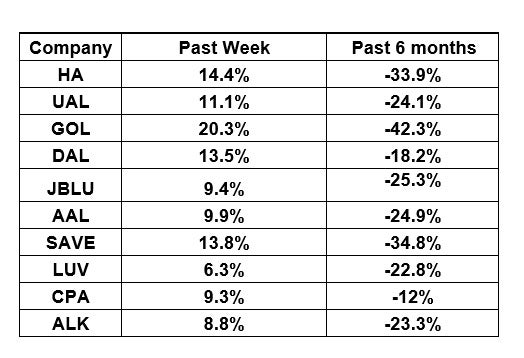 The table above shows that most airline stocks have traded in the green over the past week, causing the NYSE ARCA Airline Index to increase 10.1% to $82.26. This upside was mainly owing to the receding fears pertaining to the omicron variant of the coronavirus. Per early reports, the variant is likely to cause only mild illness. Over the past six months, the NYSE ARCA Airline Index has depreciated 22.2%.

November traffic reports by some carriers are expected in the coming days.