U.S. telecom stocks witnessed a steady uptrend over the past week as concerns regarding Omicron receded with the broad-based medical opinion that the variant is not as severe as initially feared. Reassuring claims by various pharmaceutical companies that a three-shot course of their COVID-19 vaccine could neutralize the risks associated with the new variant further fueled the industry's growth. The renewed sector optimism also found resonance in the Senate approval of Jessica Rosenworcel as the first appointed female chairperson of the FCC after serving as the acting head for almost a year.

The confirmation was affirmed by a Senate vote of 68-31 in favor of Rosenworcel. This, in turn, ensured a Democratic majority in the FCC to seamlessly pursue a government initiative to improve broadband infrastructure for greater access and deeper penetration in the underserved domestic markets to bridge the digital divide. This will help realize President Biden’s goal of providing all Americans with affordable Internet connectivity. Rosenworcel’s appointment is also expected to steer the industry to safety amid perceived threats from China-based adversities and oversee the next era of spectrum allocations.

Meanwhile, a federal appeals court opposed a plea by China Telecom against an earlier FCC directive to bar it from operating in the United States over national security concerns. Without any temporary relief against the ban, the China-based telecom firm has to cease its operations in the country next month. This is likely to aggravate the already strained Sino-US bilateral trade relationship and could induce retaliatory measures by Beijing in the near future.

1.     Nokia has inked a deal with KDDI Corporation for an undisclosed amount to support the Japan-based carrier’s transition to a fully-automated 5G core architecture. The deal will likely enhance network scale to enable subscribers to experience lower latency, increased bandwidth and higher capacity. The contract also reinforces the 25-year business relationship between the two firms.

Per the transaction, Nokia will offer 5G core standalone solutions for near-zero automation capabilities along with related software support and integration. In addition, the company will provide 5G monetization and data management software solutions to unlock future revenue-generating opportunities. These include cloud-native converged charging – used to consolidate all service charges into a single customer invoice, policy controller that acts as guardrails for greater security, and mediation that converts call data to pre-defined layouts for a specific billing system.

2.     Juniper has been selected by Bharti Airtel, a leading communications service provider in India, to deliver network upgrades for the expansion of the latter’s broadband coverage across the country. The deal builds on the long-standing partnership between the companies. It will support the increased penetration of broadband connectivity into the underserved markets.

Juniper will supply, install and support upgrades to the MX Series routers and line cards as part of its broadband network gateway to manage Airtel’s services and carrier-grade NAT solutions for encryption across the network.

3.    T-Mobile has secured a contract from Alaska Air Group, Inc. for an undisclosed amount to become the preferred wireless provider of Alaska Airlines. The collaboration is likely to improve the seamless travel experience for air passengers with unmatched network connectivity of the Un-Carrier across the country.

Per the agreement, Alaska Airlines will migrate the majority of its mobility business, including data and voice lines, to T-Mobile to leverage the uptick in demand for improved data connectivity. This, in turn, will likely ensure low latency high bandwidth services to optimize the air travel experience starting from ticketing to check-in, on-time departures, arrivals and baggage tracking.

4.    Qualcomm recently unveiled the Snapdragon G3x Gen 1 Gaming Platform for gamers to enjoy their favorite games on the go. The platform combines all the Snapdragon Elite Gaming Technologies to create a new category of gaming devices. It brings superior performance to run all Android games, play content from cloud gaming libraries and stream games from home console or PC.

5.    Ericsson has inked a contract with Nex-Tech Wireless for an undisclosed amount to augment 5G network connectivity in the rural markets of Kansas. The deal is in sync with President Biden’s initiative to offer broadband access to all Americans by enabling carriers to expand networks in rural areas that lack high-quality Internet service. 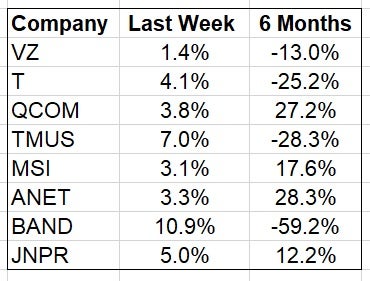 In the past five trading days, Bandwidth gained the most with its stock rising 10.9%, while none of the stocks declined.

Over the past six months, the Zacks Telecommunications Services industry has declined 16% while the S&P 500 has rallied 11%. 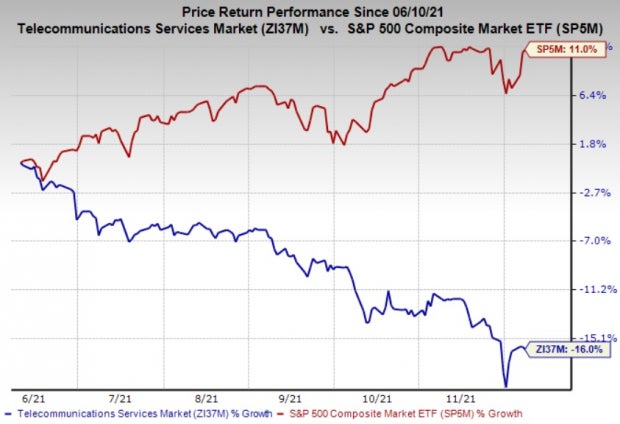 In addition to 5G deployments and product launches, all eyes will remain glued to how the administration implements key policy changes to safeguard the industry’s interests and address the bottlenecks to spur growth.