For the fiscal second quarter, earnings per share of 49 cents declined 2% year on year and missed the Zacks Consensus Estimate of 54 cents. This can be attributed to weak margins and higher costs.

Net sales of $994 million lagged the Zacks Consensus Estimate of $1,066 million. The top line increased 1% year over year on a reported basis. On an underlying basis, net sales were up 7% from the prior-year level.

Brown-Forman also unveiled first-half fiscal 2022 results, which gained from strength in American whiskey and tequila categories along with consumers’ preference for premium spirits.

Adjusted earnings slumped 24% year over year to $0.89 due to the sale of the Canadian Mist, Early Times and Collingwood brands in the prior year.

Net sales of $1,900 million rose 9% from the year-ago period. On an underlying basis, net sales were up 12%, driven by solid performance in international and emerging markets as well as double-digit growth in the Travel Retail channel. Positive price mix, higher volumes and favorable currency also aided the top line.

Net sales in Travel Retail advanced 38% on a reported basis and 64% on an underlying basis, on the back of favorable year-on-year comparisons.

Premium bourbon brands reported sales growth of 11% for the first half of fiscal 2022, led by growth in Woodford Reserve and Old Forester. On an underlying basis, sales in this category rallied 18% from the prior-year quarter.

The company’s tequila brands witnessed 16% net sales growth each on a reported basis and underlying basis. The category benefitted from growth for Herradura and elJimado, partially offset by lower volumes of New Mix in Mexico.

Growth in the United States remained flat as strength in Jack Daniel’s Tennessee Whiskey, premium bourbons, and tequilas was somewhat offset by lower inventory, the impact of acquisitions and divestitures, reduced volumes in the off-premise channel as well as supply chain headwinds. Meanwhile, gains in the developed international markets were led by Germany, United Kingdom, Korea and Spain. The emerging markets registered double-digit net sales growth, backed by volume gains across most markets, partially offset by supply chain issues.

In first-half fiscal 2022, Brown-Forman’s gross profit amounted to $1,143 million, which improved 9% from the same period in the prior year on a reported basis and 12% on an underlying basis. The reported gross margin contracted slightly to 60.1% due to negative mix and higher costs, which offset the impact of the sale of Canadian Mist, Early Times, and Collingwood brands in the prior year.

SG&A expenses increased 10% on a reported basis for the first half of the fiscal year. On an underlying basis, SG&A expenses were up 8% year over year. The metric was impacted by the timing of higher compensation expenses, increase in non-income tax reserves and cycling against lower discretionary spend in the prior-year quarter.

Operating income fell 15% to $289 million on a reported basis. Nevertheless, the figure increased 13% on an underlying basis. Operating margin declined 910 bps to 32.1% for the first half.

The company ended second-quarter fiscal 2022 with cash and cash equivalents of $1,073 million, and long-term debt of $2,354 million. Its total shareholders’ equity was $2,656 million. For the six months ended Oct 31, 2021, BF.B generated $335 million in cash from operating activities, while free cash flow amounted to $302 million.

The company hiked its quarterly cash dividend by 5% to 18.85 cents per share on Class A and Class B shares. The dividend is payable on Dec 28, 2021, to shareholders of record as of Dec 3. This will mark the 78th successive year of dividend announcement and the 38th increase in regular dividends. It also declared another special dividend of approximately $480 million of Class A and Class B common stocks to be paid on Dec 29 to shareholders of record on Dec 9.

Despite uncertainties related to the COVID-19 situation and ongoing supply chain disruptions, management raised its fiscal 2022 view. The company now expects net sales growth in high-single digits compared with the prior view of mid-single-digit growth. It still envisions gross margin to be flat or slightly down year over year due to unfavorable impacts of supply chain disruptions and higher input costs related to agave, transportation costs and commodity prices.

For fiscal 2022, the company now predicts high-single-digit growth in underlying operating expenses and operating income, up from the earlier view of mid-single-digit growth. The guidance also takes into consideration the positive impact of the removal of tariffs on American whiskey exports to the European Union from Jan 1, 2022.

Management expects these headwinds to persist in fiscal 2022, with their impact becoming less significant during the second half. In particular, it expects disruptions in the supply of glass.

This Zacks Rank #3 (Hold) company’s shares have declined 9.2% year to date against the industry’s growth of 3.2%. 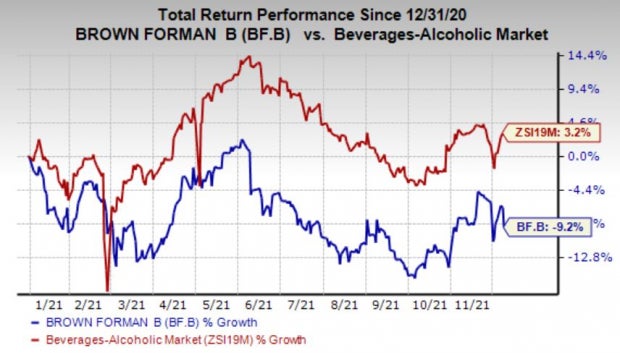 Tyson Foods, a Zacks Rank #1 (Strong Buy) stock, has a trailing four-quarter earnings surprise of 25.2%, on average. Shares of the company have gained 32.7% year to date.

The Zacks Consensus Estimate for Tyson Foods' sales for the current financial year suggests year-over-year growth of 7.5%, while the same for earnings per share indicates a decline of 10.9% from the year-ago period. TSN has an expected long-term earnings growth rate of 7.5%. You can see the complete list of today's Zacks #1 Rank stocks here.

The Zacks Consensus Estimate for ACI's sales for the current financial year suggests year-over-year growth of 3.6%. In comparison, the same for earnings per share indicates a decline of 16.7% from the year-ago reported figure. ACI has an expected long-term earnings growth rate of 12%.

Hormel Foods presently carries a Zacks Rank #2. The company has a trailing four-quarter earnings surprise of 0.7%, on average.

The Zacks Consensus Estimate for HRL's sales and earnings per share for the current financial year suggests growth of 16.3% and 3%, respectively, from the year-ago reported numbers. HRL has an expected long-term earnings growth rate of 7.2%.