Train 2, Pluto LNG’s second train, will be one of the most efficient liquefied natural gas trains in Australia, with an expected capacity of 5 million tons per annum. The project is operated by Australia-based oil and gas company Woodside Energy.

Pluto Train 2 will process natural gas from the offshore Scarborough field. Gas from the Scarborough field is normally low in carbon dioxide, which makes it a striking option for Woodside’s customers seeking user-friendly, low-carbon energy to achieve decarbonization. Pluto LNG facility also features the company’s technology on its first train, which has been operational since 2012.

The construction of Pluto Train 2 expands Baker Hughes’ global turbomachinery fleet in LNG operations. Packaging, manufacturing and testing will be carried out at Baker Hughes’ facilities in Florence and Massa, Italy.

Pluto Train 2 will play a key role in the world’s transition to sustainable energy, supporting the rising demand for natural gas, and the need for safe and reliable LNG operations. The latest order adds to Baker Hughes’ leadership position in the LNG industry.

Headquartered in Houston, TX, Baker Hughes is one of the leading oilfield service providers.

Shares of BKR have underperformed the industry in the past three months. The stock has gained 2.7% compared with the industry’s 6.9% growth. 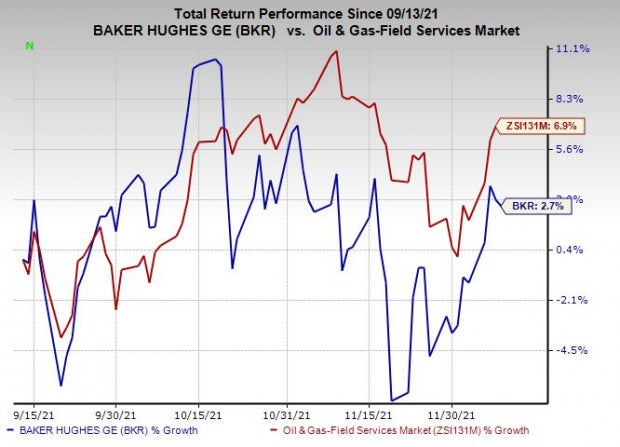 In the past year, the stock has soared 178.3% compared with the industry’s growth of 96.2%. Devon is also projected to see a year-over-year earnings surge of 3,889% in 2021. DVN currently has a Zacks Style Score of A for both Growth and Momentum. DVN’s free cash flow at the end of third-quarter 2021 was $1.1 billion, up eight-fold from the fourth-quarter 2020 levels. The company will continue to prioritize free cash flow generation in 2022 and deploy a major portion of the same to dividends and share buybacks.

ConocoPhillips (COP - Free Report) primarily engages in the exploration and production of oil and natural gas. Considering proved reserves and production, COP is the largest explorer and producer in the world. ConocoPhillips ended 2020 with proved reserves of 4.5 billion barrels of oil equivalent (BOE) and a reserve replacement ratio of 86%. By 2020, the upstream energy player produced 1,127 thousand BOE per day, comprising more than 50.4% oil.

ConocoPhillips is projected to see a year-over-year earnings surge of 717.5% in 2021. COP witnessed seven upward revisions in the past 60 days. ConocoPhillips recently acquired stakes in the Permian Basin from Shell for $9.5 billion. The acquisition involves 225,000 net Permian acres, with current production of nearly 175,000 barrels of oil equivalent per day. This made ConocoPhillips one of the leading producers in Permian.

Houston, TX-based Occidental Petroleum (OXY - Free Report) is an integrated oil and gas company, with significant exploration and production exposure. OXY is also a producer of a variety of basic chemicals, petrochemicals, polymers and specialty chemicals. As of 2020-end, Occidental’s preliminary worldwide proved reserves totaled 2.91 billion BOE compared with 3.9 billion BOE at the end of 2019.

OXY’s earnings for 2021 are expected to surge 153.5% year over year. Occidental has also witnessed six upward revisions in the past 60 days. In the third quarter, OXY achieved the divestiture target of $10 billion by entering a deal to sell its interest in two offshore Ghana assets for $750 million.