Meanwhile, the China Association of Automobile Manufacturers unveiled the November vehicle sales data in the world’s largest car market, which once again made it evident that chip shortage has been wreaking havoc on the auto industry. Vehicle sales in the country declined 9.1% year over year to 2.52 million units, tumbling for the seventh consecutive month. Nonetheless, electric vehicles in China managed to sustain the momentum, with sales of new energy vehicles skyrocketing 121% to 450,000 units in November.

2. Asbury completed the acquisition of Stevinson Automotive. Stevinson's operating assets taken over include eight new vehicle franchises — two Lexus, two Toyota, one Porsche, one Chevrolet, one Hyundai and one Jaguar, and one additional Land Rover open point. All the acquired dealerships are located in the Denver market. The Denver market is one of the most economically vibrant markets in the United States and is ideal for strong automotive brands.

The acquisition will boost Asbury’s growing footprint in the attractive and dynamic Denver market with the help of a well-respected and successful dealership group like Stevinson. The purchase will add approximately $715 million in annualized revenues to ABG, lending the company an edge to execute the five-year plan of generating $20 billion in annual revenues by 2025.

3. Lithia purchased three Ford stores from the Elder Auto Group. The Elder Ford of Tampa would boost Lithia Motor's domestic footprint in Florida, region 6 and Elder Ford of Troy and Elder Ford of Romeo will be adding density to Michigan operations in region 3. The stores are expected to jointly generate $425 million in annualized revenues. The existing on-balance sheet capacity was used for financing the acquisitions.

The addition of the Elder Ford stores is likely to take up LAD's total expected annualized revenues for 2021 to nearly $7 billion. The company is already poised to exceed the five-year plan benchmark, announced in July 2020, to reach $50 billion in revenues and $50 in earnings per share. Lithia currently carries a Zacks Rank #3 (Hold). You can see the complete list of today’s Zacks #1 Rank (Strong Buy) stocks here.

4. Ford announced the decision to invest $900 million (THB 28 billion) for the revamp of its manufacturing facilities in Thailand. This marks the auto biggie’s largest-ever single investment in the country and brings its total investments in Thailand to more than $3.4 billion (THB 100 billion) over 25 years. More than $400 million (THB 13 billion) of the planned investment will be directed toward the company’s supply-chain network.

As part of the Ford+ plan for growth and value creation, the cash outlay is aimed at investing in new state-of-the-art technologies and systems. It will also support the production of the next-gen Ranger pickup truck (one of Ford’s highest volume and most successful vehicles) and the next-gen Everest SUV. The modernization program will be implemented through Ford’s wholly-owned Ford Thailand Manufacturing and AutoAlliance Thailand truck plant, its joint venture with Japan’s Mazda Corporation.

In a separate development, Thor announced the acquisition of Elkhart Composites, Inc. The acquisition will provide Thor with an unconstrained supply of Elkboard, a superior and state-of-the-art product already utilized in many of Thor’s RV offerings. THO has vowed to make substantial capital investments in Elkboard to boost its current production capacity. 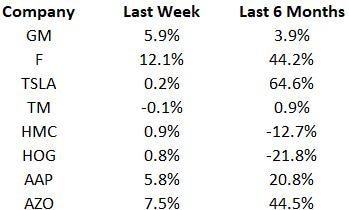 Industry watchers will keep a tab on November passenger vehicle registrations in the European Union, likely to be released by the European Automobile Manufacturers Association this week. Also, stay tuned for updates on how automakers will tackle the semiconductor shortage and make changes in business operations.