Valued at $145.3 million, the contract is expected to be completed by September 2024. Per the terms of the deal, Pratt & Whitney will procure material and support equipment for the depot maintenance facilities, supplies, services and planning for the depot activations to support F-35 jets’ sustainment.

The majority of the work related to this deal will be concentrated in East Hartford, CT and Oklahoma City, OK.

Over the past decade, a rapid rise in global terrorism and adverse geopolitical situations across borders have boosted demand for defense products, with combat aircraft constituting a major portion of that portfolio.

It is imperative to mention that the F-35 jets built by America’s largest defense contractor, Lockheed Martin (LMT - Free Report) , enjoy a dominant position in the combat jet market. With F-35 being one of the top-notch stealth aircraft, Lockheed enjoys a consistent inflow of contracts for the production, delivery of associated spare parts and other deals concerning the F-35 jet program.

In September 2021, the company clinched annualized contracts worth $6.6 billion for the fiscal years 2021-2023, involving the sustainment of its global F-35 fleet from the F-35 Joint Program Office. Such contract wins by Lockheed also benefit Pratt and Whitney, which supplies the F135 engine that powers all three variants of the F-35 fighter jets.

Therefore, as the F-35 jet continues to dominate the combat aircraft market, Pratt & Whitney stands to benefit from order flow. The latest contract win is an example of that.

The production of F-35 jets is expected to continue for many years, given the U.S. government's current inventory target of 2,456 aircraft for the Air Force, Marine Corps. and Navy. Consequently, Pratt and Whitney is expected to witness more order inflows involving the F-35 program, like the latest one, which should bolster Raytheon Technologies’ top line.

Hence, not only would Lockheed and Raytheon benefit from the solid production target for F-35 but also Northrop Grumman (NOC - Free Report) and BAE Systems Plc (BAESY - Free Report) since both of them are key partners in the F-35 program.

Northrop renders its expertise in carrier aircraft and low-observable stealth technology for the F-35 program. Being a pioneer in the development of manned combat aircraft, Northrop has a tradition of providing technological leadership in all aspects of military aviation and aircraft.

Northrop reported third-quarter 2021 earnings of $6.63 per share, which surpassed the Zacks Consensus Estimate by 11.8%. NOC stock has gained 26.6% in the past year.

BAE Systems boasts a solid long-term earnings growth rate estimate of 3.6%. BAESY stock has rallied 6.9% in the past year.

Raytheon’s shares have gained 18.7% in the past year compared with the industry’s rally of 9%. 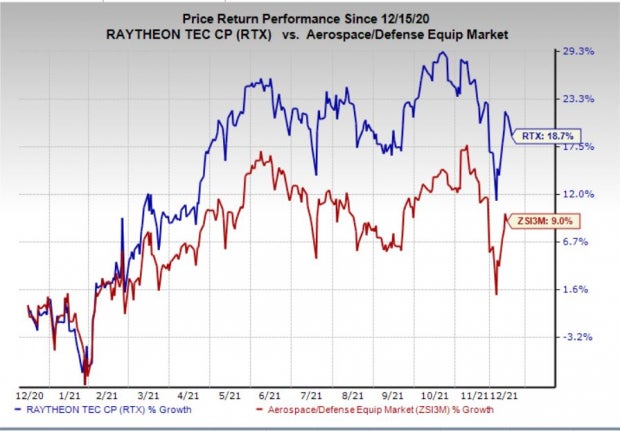