We note that Zepzelca was granted accelerated approval for treating metastatic SCLC in patients whose disease progressed on or after platinum-based chemotherapy last year. Data from the LAGOON study will support full approval of the drug.

The confirmatory study will evaluate Zepzelca monotherapy or in combination with chemotherapy, irinotecan, for overall survival (“OS”) and progression-free survival in patients whose disease has relapsed following treatment with platinum-containing chemotherapy with or without anti-PD-1 or anti-PD-L1 agents. The study will compare the monotherapy or chemotherapy-combo with the investigator's choice of chemotherapies — topotecan or irinotecan.

Data from the LAGOON study will also support the submission of a marketing authorization application for Zepzleca as a potential treatment for metastatic SCLC in Europe.

Shares of Jazz Pharmaceuticals have declined 25.1% so far this year compared with the industry’s decrease of 19.9% 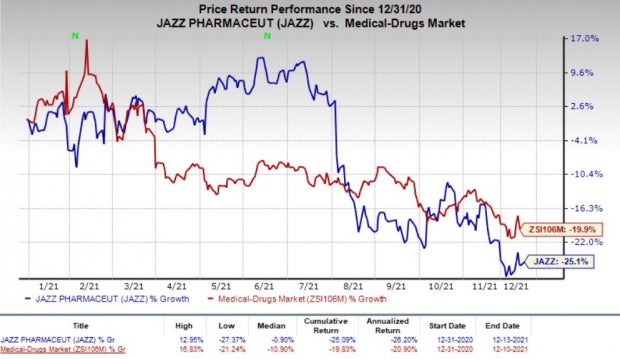 Zepzelca has become one of the key drugs in Jazz Pharmaceuticals’ oncology portfolio within a year. The company recorded almost $182 million in sales of the drug in the first nine months of 2021, the highest among cancer drugs in its portfolio. The successful completion of the confirmatory study, LAGOON, may help in boosting the sales of the drug going forward.

Last month, Jazz Pharmaceuticals initiated a late-stage study to evaluate Zepzelca in combination with Roche’s (RHHBY - Free Report) anti-PD-L1 drug, Tecentriq (atezolizumab), as a potential treatment for first-line SCLC. Lung cancer is a lucrative segment and the successful development of Zepzelca in the first-line setting will certainly boost sales of the drug.

We note that Tecentriq is Roche’s leading immuno-oncology drug for multiple indications, including different lung cancer indications and treatment settings.

Jazz Pharmaceuticals’ focus on gaining full approval as well as label expansion for Zepzelca is encouraging. However, we note that the combination regimen of Zepzelca and chemotherapy failed to meet the endpoint last year in a late-stage study evaluating it in adult SCLC patients whose disease progressed on or after platinum-based chemotherapy.

Although the study failed to meet its pre-specified criteria of significance for the primary endpoint of OS, the company believes overall results support the activity and tolerability of the drug in metastatic SCLC.

Any setback to Zepzelca in the confirmatory study may affect its accelerated approval status.

A couple of better-ranked stocks from the drug sector include Onconova Therapeutics (ONTX - Free Report) and Corbus Pharmaceuticals (CRBP - Free Report) , both carrying a Zacks Rank of 2 (Buy). You can see the complete list of today’s Zacks #1 Rank (Strong Buy) stocks here.

Onconova delivered an earnings surprise of 23.29%, on average, in the last four quarters.

Corbus delivered an earnings surprise of 29.89%, on average, in the last four quarters.