Here's Why You Should Retain Veeva Systems (VEEV) Stock for Now

Veeva Systems Inc. (VEEV - Free Report) is well poised for growth in the coming quarters, backed by its strong product portfolio. A robust third-quarter fiscal 2022 performance, along with the increasing adoption of the company’s products, is expected to contribute further. Stiff competition and forex woes persist.

The renowned provider of cloud-based software applications and data solutions for the life sciences industry has a market capitalization of $41.03 billion. The company projects 16.7% growth for the next five years and expects to maintain its strong performance. It has delivered an earnings surprise of 12.73% for the past four quarters, on average. 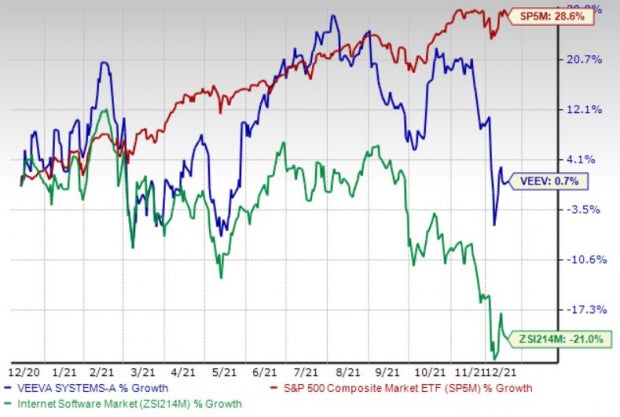 Increasing Product Adoption: Veeva Systems has been registering a robust adoption for its products over the past few months. The company, in November, announced that the Center for Breakthrough Medicines adopted Veeva Vault Quality Suite to modernize development and manufacturing services for sponsors.

In October, Veeva Systems announced that the number of biotechs using Veeva Vault CDMS to run faster and more effective oncology trials more than doubled from the last-year level.

Veeva Systems added 15 SMB customers and had some significant enterprise expansions, which auger well for the company. The company witnessed strength in the international market as well, including wins for two large field forces in Asia, raising our optimism on the stock. Expansion of both margins also bodes well. A raised guidance for the fiscal year is a major positive.

Veeva Systems is witnessing a positive estimate revision trend for 2022. In the past 90 days, the Zacks Consensus Estimate for its earnings has moved 2.8% north to $3.66.

The Zacks Consensus Estimate for the company’s fourth-quarter fiscal 2022 revenues is pegged at $480.4 million, suggesting a 21.1% improvement from the year-ago quarter’s reported number.

LabCorp, carrying a Zacks Rank #2 (Buy), has an estimated long-term growth rate of 10.6%. The company’s earnings surpassed estimates in the trailing four quarters, the average surprise being 25.73%. You can see the complete list of today’s Zacks #1 Rank (Strong Buy) stocks here.

LabCorp has gained 42.1% compared with the industry’s 13.3% rise over the past year.

Thermo Fisher has an estimated long-term growth rate of 14%. The company’s earnings surpassed estimates in the trailing four quarters, the average surprise being 9.02%. It currently carries a Zacks Rank #2.

Thermo Fisher has gained 37.2% compared with the industry’s 7.4% rise over the past year.

AMN Healthcare has an estimated long-term growth rate of 16.2%. The company’s earnings surpassed estimates in the trailing four quarters, the average surprise being 19.51%. It currently sports a Zacks Rank #1.

AMN Healthcare has gained 56.8% against the industry’s 58.5% fall over the past year.