Core net new assets were $45.1 billion in the reported month. This reflected a rise of 23% from the previous month and 40% year over year.

Schwab’s average interest-earning assets of $584.4 billion rose 2% from October 2021 and 25% year over year. Average margin balances were $87.3 billion, growing 4% from the previous month and 62% on a year-over-year basis. Average bank deposit account balances totaled $153.9 billion, down marginally from the previous month and 5% from November 2020.

Schwab’s active brokerage accounts totaled 32.9 million at the end of November 2021, up marginally on a sequential basis and 13% from the year-ago month. Clients’ banking accounts were 1.6 million, up 1% on a sequential basis and 7% from November 2020. Likewise, the number of corporate retirement plan participants was down 1% from the prior-month level but up 7% year over year to 2.2 million.

Schwab’s inorganic growth efforts have reinforced its position as a leading brokerage player and are expected to be accretive to earnings. By offering commission-free trading, the company has witnessed a rise in client assets and brokerage accounts, which, in turn, is improving its market share.

Over the past year, shares of Schwab have gained 56.3%, outperforming 39.1% rise of the industry. 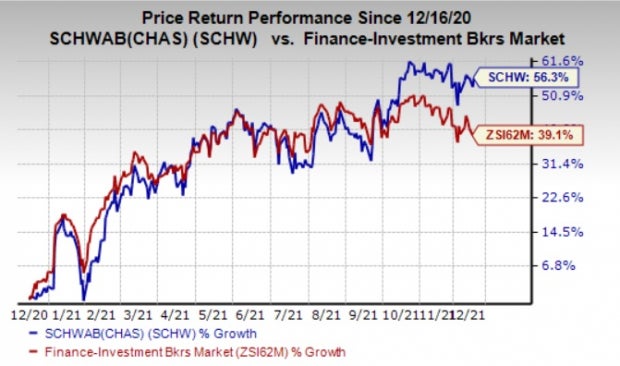 A couple of other brokerage firms that have come out with monthly data are Interactive Brokers Group (IBKR - Free Report) and Tradeweb Markets Inc. (TW - Free Report) .

Interactive Brokers’ Electronic Brokerage segment announced performance metrics for November 2021. The segment (that deals with the clearance and settlement of trades for individual and institutional clients globally) reported a surge in client Daily Average Revenue Trades (DARTs) both on a year-over-year and a sequential basis.