Canadian Solar Inc. (CSIQ - Free Report) recently sold its Jaíba V solar project, located in Brazil, to a renewable energy company, VTRM. With a generation capacity of 635 megawatt-peak (MWp), the aforementioned project is currently in the development stage and construction is estimated to start next year.

On being operational, presumably by 2023, this project is expected to generate clean electricity equivalent to the annual consumption of over 500,000 households

Brazil is known for its extremely favorable conditions for the production of energy through photovoltaic (PV) systems. Per a report by Clean Energy Latin America (CELA), the country’s lowest solar irradiation is better than most of Europe’s highest.

As a result, the solar market in this nation has been growing rapidly in recent times. As of August 2021, Brazil has reached about 10 gigawatts (GW) of installed photovoltaic power, according to the latest data from the Brazilian Association of Photovoltaic Solar Energy (ABSOLAR).

The aforementioned sale is expected to further strengthen Canadian Solar’s footprint in Brazil, a nation where this solar stock already has a solid presence. With this sale, Canadian Solar will have successfully monetized 1.6 gigawatts-peak (GWp) of utility-scale solar projects in Brazil. This should get duly reflected in the company’s income statement in the form of solid revenue growth in the coming quarters.

Increased penetration in the Brazilian solar market provides ample growth opportunities for solar companies like Canadian Solar. According to a Mordor Intelligence report, Brazil’s solar market is expected to witness a CAGR of 5.5% during the 2021-2025 period. This bodes well for Canadian Solar, which aims at steadily executing and monetizing its remaining pipeline of more than 2.5 GWp of high-quality, contracted solar projects in Brazil.

Considering the robust growth prospects of the Brazilian solar market, other solar companies have also undertaken initiatives to tap the same.

For instance, in September 2021, Enphase Energy (ENPH - Free Report) launched its IQ 7+ microinverters in the solar market of Brazil. Shipping of these microinverters is likely to have commenced in October 2021.

The Zacks Consensus Estimate for Enphase Energy’s 2021 earnings has been revised upward by 16.5% to $2.26 per share in the past 60 days. ENPH stock has appreciated 33.1% in the past six months.

The Zacks Consensus Estimate for JinkoSolar’s 2021 earnings has been revised upward by 3.3% to $1.27 per share in the past 60 days. JKS stock has appreciated 12.4% in the past six months.

In 2019, SolarEdge Technologies (SEDG - Free Report) announced its expansion in the Brazil PV market with the introduction of three-phase inverters with synergy technology up to 100kW (kilowatt-peak) that fit the 127/220, 220/380 and 277/480 grid types.

SolarEdge’s long-term earnings growth rate is pegged at 17.70%. The stock has gained 20.5% in the past six months.

In a year’s time, shares of Canadian Solar have lost 26.4% compared with the industry’s decline of 20.6%. 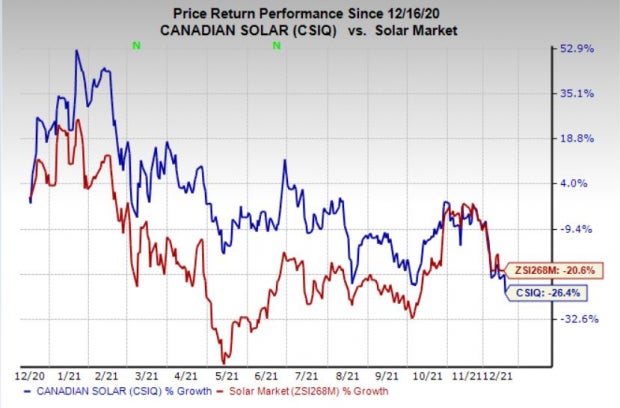