MoffettNathanson was founded in 2013. Since then, it has been considered the standard-bearer of technology equity research.

Following the announcement of the acquisition, shares of SVB Financial have gained 3.5%.

SVB Financial is a diversified financial services company that operates through, among others, the Silicon Valley Bank, its primary subsidiary, providing a wide range of banking and financial products and services.

With the acquisition of MoffettNathanson, SVB Leerink (which currently provides investment banking services across healthcare sectors) will be able to expand its research coverage beyond healthcare to include companies in the technology industry as well.

Greg Becker, the president and CEO of SVB Financial, stated, “The MoffettNathanson team has built an incredible reputation as a leader in equity research. The addition of technology equity research is another important step in further solidifying our place as the essential partner to innovation economy clients. I’m proud to welcome the MoffettNathanson team to SVB and continue to strengthen the capabilities of our investment banking practice.”

Craig Moffett, the founding partner of MoffettNathanson, commented, “Insight into the innovation economy is absolutely critical to understanding the sectors we cover. SVB’s deep relationships with the world’s leading innovators will not only bring our clients unique opportunities to participate in the value creation cycle of earlier-stage growth companies, they will also provide our analysts with unique insights into the competitive forces that will shape the destinies of the largest companies in our coverage universe.”

SVB Financial has been undertaking efforts to expand globally. While its U.K. and Asia operations seem to be growing, businesses in Canada and Germany are expected to further boost revenues.

In July 2021, it acquired Boston Private, which is expected to further strengthen its private bank and wealth management offerings. Last year, SVB Financial acquired the debt investment business of WestRiver Group. These deals will likely keep supporting its position as one of the foremost providers of financing solutions to innovative companies.

Over the past year, shares of SVB Financial have gained 91.9% compared with 52.5% growth of the industry. 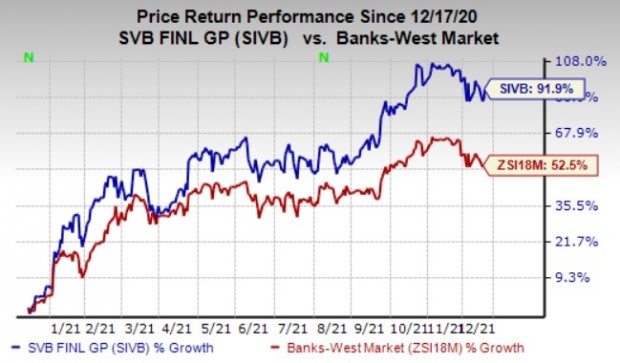 The buyout has brought together two high-performing banking companies. It bolsters United Bankshares’ position as one of the largest and best-performing regional banking companies in the Mid-Atlantic and Southeast. The combined entity will now operate across 250 locations in opportunistic markets in the United States.

Last month, CVB Financial Corp. (CVBF - Free Report) , the holding company for Citizens Business Bank, announced that Citizens received regulatory approvals from the Federal Deposit Insurance Corporation, and the California Department of Financial Protection and Innovation to complete its previously announced merger agreement with Suncrest Bank. The stock-and-cash deal worth $204 million is expected to close on or about Jan 7, 2022, subject to the satisfaction of all remaining closing conditions.

In an effort to expand its presence, CVBF announced the agreement and plan of reorganization and merger in July, according to which Suncrest bank would merge with and into Citizens. The acquisition is the second-largest in CVB Financial’s history.