Apellis Pharmaceuticals, Inc. (APLS - Free Report) and partner Swedish Orphan Biovitrum AB (Sobi) announced that the European Commission (EC) has approved Aspaveli (pegcetacoplan) for the treatment of adult patients with paroxysmal nocturnal hemoglobinuria (PNH) who are anemic after treatment with a C5 inhibitor for at least three months.

Following the nod, Aspaveli became the first and only targeted C3 therapy to be approved in Europe for the treatment of PNH, a rare and chronic blood disorder.

Shares of Apellis were up 4% on Wednesday following the announcement of the news. The stock has plunged 22.5% so far this year compared with the industry’s decrease of 22.1%. 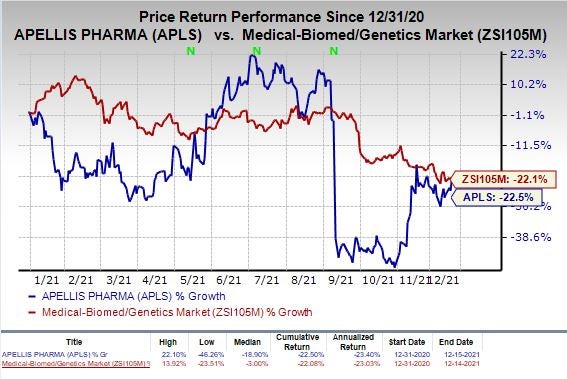 The approval of Aspaveli in the EU was expected since, in October 2021, the European Medicines Agency’s Committee for Medicinal Products for Human Use had rendered a positive opinion, recommending marketing authorization to Aspaveli for the treatment of PNH.

The EU nod was based on data from the head-to-head phase III study — PEGASUS — that compared Aspaveli to Alexion’s (now part of AstraZeneca’s [(AZN - Free Report) ]) Soliris (eculizumab) for improvement in hemoglobin levels in PNH patients. Data from the same showed that treatment with Aspaveli led to superior improvement in hemoglobin levels compared to Soliris. The drug is marketed under the trade name Empaveli in the United States.

In July 2021 AstraZeneca closed the acquisition of rare disease drugmaker, Alexion for $39 billion.

We remind investors that in May 2021, the FDA approved Empaveli as a monotherapy treatment for adult patients suffering from PNH.

Empaveli is approved for treatment-naïve patients as well as those switching from Soliris and Ultomiris (ravulizumab).

Pegcetacoplan, as a monotherapy, is being evaluated in two phase III studies, namely, DERBY and OAKS, for treating patients with geographic atrophy or GA. In September 2021, Apellis announced mixed top-line data from the DERBY and OAKS studies. While the OAKS study met the primary endpoint, the DERBY study did not.

The company plans to submit a new drug application to the FDA for pegcetacoplan to treat GA in the first half of 2022.

Pegcetacoplan is also being investigated in the phase II MERIDIAN study for treating amyotrophic lateral sclerosis or ALS. A potential label expansion of the drug for any of the above indications will boost sales and drive growth for the company.

Earnings of Sarepta Therapeutics surpassed estimates in two of the trailing four quarters and missed the same on the other two occasions.

Editas Medicine’s earnings surpassed estimates in two of the trailing four quarters and missed the same on two occasions.