Ross Stores Inc. (ROST - Free Report) is poised for long-term growth, backed by the ongoing strength in consumer demand despite the uncertainty regarding supply-chain woes. It expects to gain market share due to increased retail closures and bankruptcies in recent months. ROST has been witnessing broad-based growth across certain merchandise categories and regions as well as robust comparable store sales, which bodes well.

The company has a trailing four-quarter earnings surprise of 22.7%, on average. The beat streak instills further investor confidence in the stock. In third-quarter fiscal 2021, the company reported the third straight quarter of earnings and sales beat. Earnings and revenues improved 5.8% and 19%, respectively, from the third quarter of fiscal 2019. Results outpaced management’s expectations and benefited from robust customer demand.

Ross Stores has been consistent with the execution of its store expansion plans over the years. The company’s store expansion efforts are focused on continually increasing penetration in the existing as well as new markets. Ross Stores completed its expansion program for fiscal 2021 by introducing 18 Ross and 10 dd’s DISCOUNTS stores in the fiscal fourth quarter. In fiscal 2021, management added 65 locations, including 44 Ross and 20 dd’s DISCOUNTS. It plans to shut down one store by this year-end.

Management intends to open about 100 stores in fiscal 2022. As of Oct 30, 2021, the company operated 1,629 “Ross Dress for Less” stores across 40 states, the District of Columbia and Guam, and 295 dd’s DISCOUNTS stores in 21 states. Earlier, it expected to expand the Ross chain of stores to 2,400 locations alongside operating 600 dd’s DISCOUNTS stores over the long term.

Ross Stores remains encouraged by the ongoing strength in consumer demand despite the uncertainty regarding supply-chain woes. Ross Stores expects comps growth of 7-9%, while overall sales are expected to grow 10-13% for the fourth quarter of fiscal 2021. Earnings per share are envisioned to be 83-93 cents for the same quarter.

Backed by the robust year-to-date performance and a favorable fiscal fourth-quarter view, ROST updated its guidance for fiscal 2021. Comps are likely to increase 12-13%, suggesting an increase from the earlier mentioned 10-11% growth. Ross Stores expects earnings per share of $4.65-$4.75 compared with $4.20-$4.38 stated earlier. It delivered earnings of $4.60 in fiscal 2019. The company’s fiscal 2021 guidance reflects comparisons with the fiscal 2019 forecasts.

Ross Stores, like others in the industry, has been witnessing the effects of the worsening industry-wide supply-chain congestion, which has led to higher freight costs and distribution expenses.

Going forward, the company notes that there is greater uncertainty about the worsening of industry-wide supply-chain congestion as Ross Stores enters the holiday season. The company’s guidance for the fiscal fourth quarter includes the impacts of ongoing freight pressure related to the supply-chain congestion. Moreover, management stated that freight cost headwinds are not likely to subside at least through the first half of fiscal 2022.

Shares of the Zacks Rank #3 (Hold) company have declined 7.2% in the past year against the industry’s growth of 29.3%. 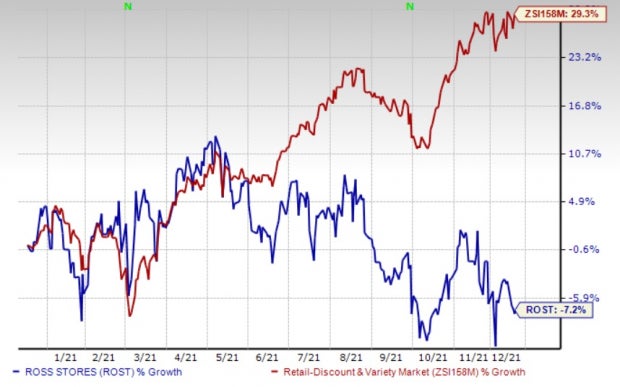 Costco currently has a Zacks Rank #2 (Buy). The company has a trailing four-quarter earnings surprise of 8.3%, on average. Shares of COST have surged 50.6% in the past year.

The Zacks Consensus Estimate for Costco’s current financial-year sales suggests growth of 10.7%. The same for earnings per share indicates 13.2% growth from the year-ago period’s reported figure. COST has an expected long-term earnings growth rate of 8.8%.

Target, a Zacks Rank #2 stock at present, has a trailing four-quarter earnings surprise of 19.7%, on average. The TGT stock has gained 31.9% in a year’s time.

The Zacks Consensus Estimate for Target’s current financial-year sales and earnings per share suggests growth of 13.9% and 40%, respectively, from the year-ago period’s reported numbers. TGT has an expected long-term earnings growth rate of 14.4%.

Lowe’s currently carries a Zacks Rank #2. The company has a trailing four-quarter earnings surprise of 14.3%, on average. Shares of LOW have gained 55.2% in the past year.

The Zacks Consensus Estimate for Lowe’s current financial-year earnings per share suggests growth of 34.4% from the year-ago period. LOW has an expected long-term earnings growth rate of 14.8%.