Equinor ASA (EQNR - Free Report) and France-based Engie announced the initiation of the H2BE project, which is designed to produce low-carbon hydrogen from natural gas in Belgium.

In October, the Belgium government released its hydrogen strategy that envisages the sole use of green hydrogen produced from renewable sources. Equinor, a major gas supplier to Belgium, believes that the H2BE project will help implement the strategy.

The H2BE project aims to produce hydrogen from natural gas with the help of autothermal reforming (ATR) technology associated with carbon capture and storage. The ATR technology grants decarbonization rates of more than 95% and the production of hydrogen at attractive prices. The captured carbon dioxide will be carried in a liquid state and stored at a site on the sub-surface of the Norwegian North Sea.

Equinor and Engie will initiate a feasibility study to determine the technical and economic efficiency of a Ghent site to produce hydrogen. At the same time, the companies have been in talks with potential hydrogen offtakers. Beside this, discussions are currently underway with North Sea Port on integration with port infrastructure.

Equinor and partners intend to begin operations ahead of time to reach Belgium’s 2030 interim decarbonization targets. The H2BE project highlights the crucial role of low-carbon hydrogen in reaching net-zero and rapidly upscale a clean hydrogen market in the future.

Equinor believes that hydrogen as well as carbon capture and storage are crucial for the energy transition to succeed. The companies will leverage their strong and complementary expertise to contribute to the success of Belgium’s hydrogen economy.

Shares of EQNR have outperformed the industry in the past six months. The stock has gained 35.4% compared with the industry’s 10.3% growth. 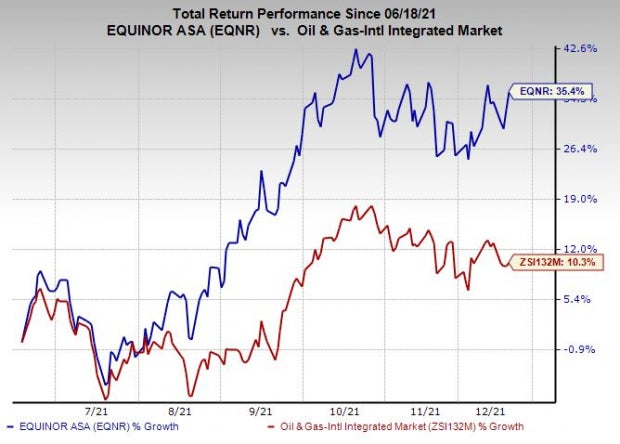 Investors interested in the energy sector might look at the following companies that presently carry a Zacks Rank #2 (Buy). You can see the complete list of today’s Zacks #1 Rank (Strong Buy)stocks here.

PetroChina is expected to see an earnings growth of 411% in 2021. PTR currently has a Zacks Style Score of A for Value. In the first six months of 2021, PetroChina’s upstream segment posted an operating income of RMB 30.9 billion, nearly trebling from the year-ago profit of RMB 10.4 billion.

RPC, Inc. (RES - Free Report) is among the leading providers of advanced oilfield services and equipment to almost all prospective oil and gas shale plays in the United States. The company derives strong and stable revenues via diverse oilfield services, including pressure pumping, coiled tubing and rental tools.

RPC is expected to see an earnings growth of 100% in 2021. RES witnessed three upward revisions in the past 60 days. With no debt load, the company had cash and cash equivalents of $80.8 million at the third-quarter end. This reflects its strong balance sheet, which will provide the company with massive financial flexibility. It allows RPC to remain afloat during tough times.

Marathon Oil Corporation (MRO - Free Report) , based in Houston, TX, is a leading oil and natural gas exploration and production company. MRO’s operations are mainly concentrated in the United States (including Oklahoma, Eagle Ford, Bakken and Northern Delaware) and Equatorial Guinea. At the end of 2020, MRO had approximately 972 million oil-equivalent barrels in net proved reserves (52% crude oil/condensate and 69% proved developed) and 86% was located in the United States.

Marathon’s earnings for 2021 are expected to surge 212.1% year over year. MRO currently has a Zacks Style Score of B for Growth and A for Momentum. Marathon has achieved its initial $500 million gross 2021 debt reduction target, which was largely funded by the first-quarter free cash flow of $443 million.