Here's Why You Should Retain Catalent (CTLT) Stock for Now

Catalent, Inc. (CTLT - Free Report) is well poised for growth in the coming quarters, backed by its robust facility expansion activities over the past few months. A robust first-quarter fiscal 2022 performance, along with a slew of strategic deals over the past months, is expected to contribute further. Catalent’s operation in a tough competitive landscape and forex woes pose a threat.

The renowned global provider of advanced delivery technologies has a market capitalization of $21.74 billion. Catalent projects 16.9% growth for the next five years and expects to maintain its strong performance. It has delivered an earnings surprise of 9.88% for the past four quarters, on average. 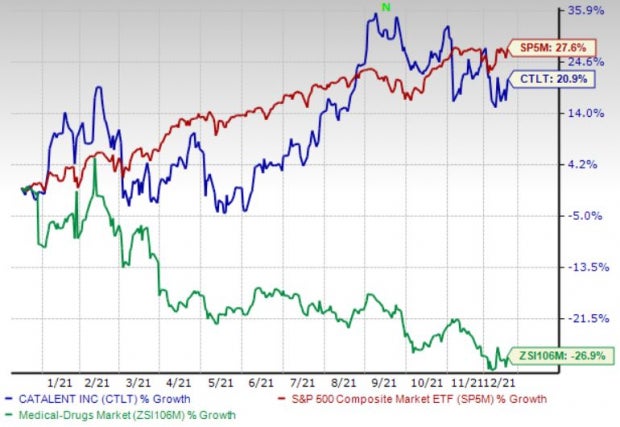 Expansionary Activities: We are upbeat about Catalent’s robust expansionary activities via opening of a slew of facilities over the past few months. The company, in October, opened a new facility in San Diego in response to increased demand from pharmaceutical and biopharmaceutical customers for integrated development, clinical packaging, and distribution solutions on the U.S. West Coast.

Also in October, the company opened its new clinical supply facility in the Shiga prefecture of Japan to meet the growing demand for end-to-end services, including primary packaging and white glove services.

Strategic Deals: We are optimistic about Catalent’s robust growth opportunities via its recent tie-ups and buyouts. The company, in September, signed a commercial supply agreement with Phathom Pharmaceuticals for its lead compound — vonoprazan — a novel, orally active-potassium competitive acid blocker (P-CAB).

In August, Catalent announced that it reached an agreement to acquire Bettera Holdings (a well-known manufacturer in the high-growth gummy, soft chew and lozenge segments), subject to customary conditions.

Strong Q1 Results: Catalent’s solid first-quarter fiscal 2022 results, along with the year-over-year uptick in both the top and the bottom line, buoy optimism. Continued strength in its Biologics arm in the quarter under review is encouraging as well. Robust performances by the Clinical Supply Services, and Softgel and Oral Technologies segments also raise our optimism. Expansion of both margins bodes well.

Forex Woes: Catalent has significant operations outside the United States. As a result, changes in the exchange rates of these or any other applicable currency to the U.S. dollar will affect its revenues, earnings and cash flows. There has been, and may continue to be, volatility in currency exchange rates affecting the various currencies in which Catalent conducts business. This could result in unrealized and realized exchange losses despite any effort the company may undertake to manage or mitigate its exposure to fluctuations in the values of various currencies.

Catalent is witnessing a positive estimate revision trend for 2022. In the past 90 days, the Zacks Consensus Estimate for its earnings has moved 6.8% north to $3.75.

The Zacks Consensus Estimate for the company’s second-quarter fiscal 2022 revenues is pegged at $1.16 billion, suggesting a 27.2% improvement from the year-ago quarter’s reported number.

LabCorp, flaunting a Zacks Rank #1 (Strong Buy), has an estimated long-term growth rate of 10.6%. The company’s earnings surpassed estimates in the trailing four quarters, the average surprise being 25.73%. You can see the complete list of today’s Zacks #1 Rank stocks here.

LabCorp has gained 51.2% compared with the industry’s 11.4% rise over the past year.

Thermo Fisher has an estimated long-term growth rate of 14%. The company’s earnings surpassed estimates in the trailing four quarters, the average surprise being 9.02%. It currently carries a Zacks Rank #2 (Buy).

Thermo Fisher has gained 41.7% compared with the industry’s 6.2% rise over the past year.

AMN Healthcare has an estimated long-term growth rate of 16.2%. The company’s earnings surpassed estimates in the trailing four quarters, the average surprise being 19.51%. It currently sports a Zacks Rank #1.

AMN Healthcare has gained 66.2% against the industry’s 58.9% fall over the past year.