The European Automobile Manufacturers Association (“ACEA”) released data for passenger car registrations made in November 2021. In a telling sign that chip shortage continues to wreak havoc on the auto industry, new car registrations tailed off 20.5% year over year to 713,346 units, marking the fifth straight monthly decline. Many of the European Union (EU) markets saw double-digit declines. Registrations in major markets like Spain, Germany, and Italy plummeted 12.3%, 31.7%, 30.7%, and 24.6%, respectively. France noted a modest dip of 3.2% year over year. The sales drop over the last few months has pushed the cumulative volumes over the first 11 months of 2021 into the red territory, with sales declining 0.04% year over year.

Genuine Parts announced plans to acquire Kaman Distribution Group (“KDG”) in a $1.3-billion, all-cash deal. Based in Bloomfield, KDG is a power transmission, automation, and fluid power industrial distributor and solutions provider. With a headcount of around 17,000, the company operates across the United States and serves more than 5,000 customers. Subject to satisfactory closing conditions, the deal is set for closure in first-quarter 2022.

The buyout is expected to bolster Genuine Parts’ scale and market position while creating fresh opportunities for long-term growth, profits, and cash flow. It should be noted that KDG is expected to generate sales of $1.1 billion next year. Genuine Parts anticipates the buyout to be accretive to earnings in the first year after closing of the transaction and achieve $50-million annual run-rate synergies over three years. The expected leverage at the completion of the transaction is ~2x. The deal will be financed at closing via an existing revolver and accounts receivable sales agreement. GPC is expected to maintain liquidity of more than $2 billion.

This dealership has a robust reputation for serving BMW loyal customers in the metropolitan Detroit market for more than 50 years. Further, the buyout seeks to scale up Penske’s relationship with the BMW brand. Terms of the transaction have not been disclosed, but roughly $100 million in annualized revenues are expected to be generated from the acquisition.

AutoZone authorized the buyback of an additional $1.5 billion of its common stock related to the ongoing share-repurchase program. The company had commenced the share-repurchase program in 1998. To date, AutoZone’s board has authorized $29.2 billion in share repurchases in total, including the above amount. AutoZone — which had tapped brakes to the program amid coronavirus-induced uncertainty — resumed the share-buyback program in first-quarter fiscal 2021, which boosted investors' confidence.

AZO’s robust financial performance during the last reported quarter (first-quarter fiscal 2022) enabled it to repurchase additional shares while maintaining its investment-grade credit ratings. AutoZone is dedicated to using the proceeds from the share repurchase to boost shareholders’ value while maintaining sufficient liquidity to provide it with adequate financial flexibility. In fact, the company’s disciplined capital allocation approach to reinvest in the business and engage in meaningful investor-friendly moves is praiseworthy.

Cummins’ investor-friendly moves are praiseworthy. In July, the company approved a quarterly cash dividend of $1.45 per share, marking an increase of 7% from the previous figure of $1.35. This marked the 12th consecutive year of dividend increase, outlining the firm’s consistent practice of returning wealth to shareholders while ploughing back some profits for the future. In the first nine months of 2021, CMI returned $1.83 billion to shareholders via dividends and buybacks, consistent with its target of returning 75% of operating cash flow to investors in 2021. 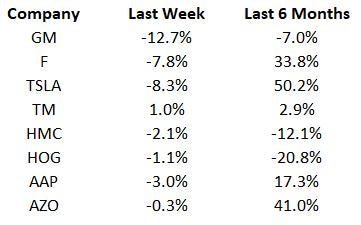 Industry watchers will keep a tab on November commercial vehicle registrations in the European Union, likely to be released by the ACEA this week. Also, stay tuned for usual news releases by automakers through the week.