The majority of the service providers are resorting to avant-garde network solutions to establish consistent connectivity, especially in rural areas. In fact, nearly 6% of the population, or 1.5 million households, are deprived of a basic Internet connection. In sync with this, the recent endeavor by Vodafone UK comes as a significant boon.

The company has zeroed in on a range of initiatives to tackle the challenges posed by digital exclusion. These initiatives are charities.connected, Great British Tech Appeal in association with Barnardo’s and Buy One, Give One with Vodafone Together and the Trussell Trust. Barnardo’s is the U.K.'s largest children's charity.

Backed by considerable progress, Vodafone UK has launched a ReBoxing Day campaign to encourage customers to donate their old devices so that the underserved benefit from the much-needed technology. Interestingly, the company pointed out that U.K.-based customers owned nearly £20 billion worth of unused tech.

As a result, the initiative will help bolster the distribution of devices among the disadvantaged. Vodafone will further add six months of free connectivity to support individuals and families devoid of the basic necessity of online work and distance learning. The company will also provide several training packages to U.K.-based small businesses, in turn, honing their skills to adopt and use innovative digital tools in the long run.

Driven by this long-term commitment, Vodafone’s Christmas campaign aims to provide crucial Internet connectivity to needy households while tackling digital poverty for a better tomorrow. Last month, Vodafone announced that it is conducting trials for eco-friendly self-powered mobile phone towers in a concerted effort to reduce harmful emissions and achieve net-zero in the U.K. by 2027.

The “Eco-Towers” run on renewable energy sources like wind and solar power for self-powered battery operations and eliminate the dependencies on diesel generators for backup power. Vodafone has been working in unison with Crossflow Energy Company to develop these phone towers.

With a diverse and open ecosystem, Vodafone aims to develop a more cost-effective, secure, energy-efficient and customer-focused network by using components from different suppliers that adhere to a common set of standards. This is likely to facilitate the carrier to release new features simultaneously across multiple sites while adding capacity and resolving outages faster. Vodafone has pledged to halve its emissions in its supply chain by 2030 across 21 countries before reaching net-zero across its full value chain by 2040.

Vodafone currently has a Zacks Rank #5 (Strong Sell). Its shares have declined 8.6% compared with 2.9% fall of the industry in the past year. 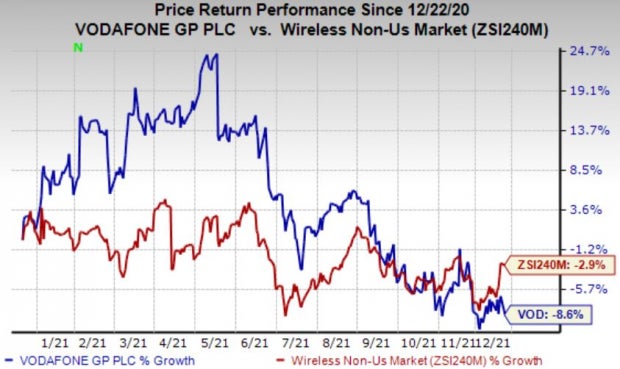 America Movil, S.A.B. de C.V. (AMX - Free Report) is a better-ranked stock in the industry, carrying a Zacks Rank #2 (Buy). The Zacks Consensus Estimate for its current-year earnings has been revised 9% upward over the past 60 days.

America Movil delivered a trailing four-quarter earnings surprise of 4.8%, on average. It has surged 47.1% in the past year. AMX has a long-term earnings growth expectation of 26.7%.

Clearfield, Inc. (CLFD - Free Report) also carries a Zacks Rank #2. The Zacks Consensus Estimate for its current-year earnings has been revised 8.8% upward over the past 60 days.

Clearfield delivered a trailing four-quarter earnings surprise of 50.8%, on average. It has catapulted 181.4% in the past year.

Qualcomm Incorporated (QCOM - Free Report) is another solid pick for investors, holding a Zacks Rank #2. The consensus estimate for current-year earnings has been revised 14% upward over the past 60 days.

Qualcomm delivered a trailing four-quarter earnings surprise of 11.2%, on average. It has gained 20.7% in the past year. QCOM has a long-term earnings growth expectation of 15.3%.