Janis Cannon, senior vice president, upscale brands, Choice Hotels said “Not only will the Cambria Hotel Niagara Falls put guests right at the doorstep of the majestic waterfalls, but its central location near downtown's shops and restaurants will make this hotel the perfect place to experience this stunning part of the country.”

Choice Hotels relies heavily on expansion in both domestic and international markets. The company has nearly 60 Cambria hotels open across the United States in famous cities like Chicago, Los Angeles, New York, New Orleans and Phoenix. The brand has more than 70 hotels in the pipeline.

Choice Hotels’ riveting growth potential depends on the constant expansion of its brands. In fact, the company’s portfolio of well-segmented brands is getting stronger. During third-quarter 2021, its upscale portfolio reported an impressive unit growth of 22% year over year, primarily driven by Cambria and the Ascend Hotel Collection. During the quarter, the Cambria brand continued its positive momentum with unit growth of more than 9% year over year. As of September end, the brand had 17 projects under active construction.

In the past six months, shares of the company have gained 15.7%, against the industry’s decline of 0.8%. 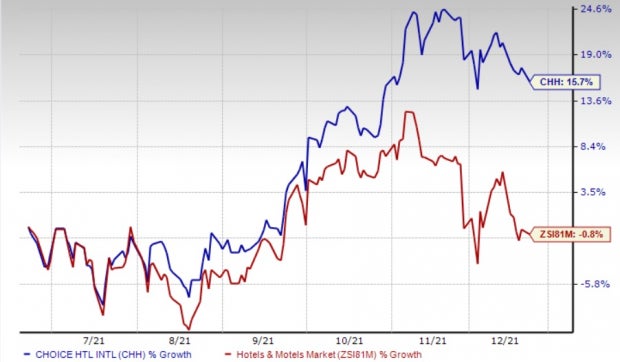 Hilton Grand Vacations sports a Zacks Rank #1 (Strong Buy). The company has a trailing four-quarter earnings surprise of 411.1%, on average. Shares of the company have increased 55.3% so far this year. You can see the complete list of today’s Zacks #1 Rank stocks here.

The Zacks Consensus Estimate for Hilton Grand Vacations’ current financial-year sales and earnings per share (EPS) suggests growth of 222.1% and 170.8%, respectively, from the year-ago period’s levels.

Bluegreen Vacations flaunts a Zacks Rank #1. The company has a trailing four-quarter earnings surprise of 695%, on average. Shares of the company have soared 119.8% so far this year.

Camping World has a trailing four-quarter earnings surprise of 70.9%, on average. Shares of the company have appreciated 59.1% so far this year. The Zacks Consensus Estimate for CWH’s financial-year sales and EPS suggests growth of 25.9% and 77.1%, respectively, from the year-ago period’s levels.