Overall, shares of this Zacks Rank #4 (Sell) company have declined 0.3% in the past three months against the industry’s growth of 1.3%. 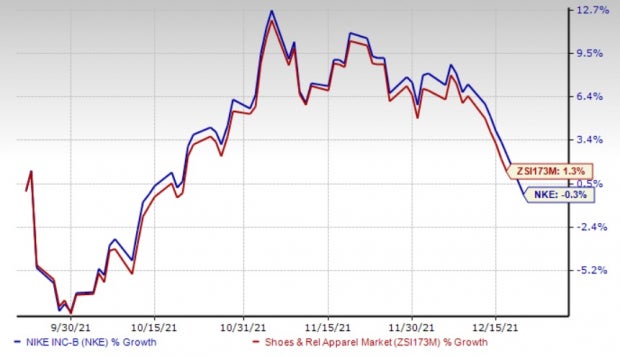 In the reported quarter, the company’s earnings per share of 83 cents increased 6.4% from 78 cents reported in the year-ago quarter and beat the Zacks Consensus Estimate of 63 cents.

Revenues of the Swoosh brand owner improved 1% year over year to $11,357 million and surpassed the Zacks Consensus Estimate of $11,218 million. On a currency-neutral basis, revenues were flat year over year, driven by growth across North America and EMEA, offset by declines in Greater China and APLA, and the ongoing impacts of supply chain headwinds in its marketplace.

Sales at NIKE Direct were $4.7 billion, up 9% on a reported basis and 8% on a currency-neutral basis. The NIKE Direct business benefited from robust growth in North America Direct, including record sales during the Black Friday week. North America Direct business increased 30%. NIKE Direct growth was also driven by steady normalization of the owned retail business and continued momentum in the digital business. Revenues at owned stores increased 4%, driven by improved traffic and higher conversion rates.

However, Wholesale revenues fell 6% due to the impact of lower availability inventory supplies, stemming from the delays in transit.

The NIKE Brand revenues were $10,816 million, up 1% year over year on a reported basis. Revenues for the brand were flat on a constant-dollar basis as growth in the NIKE Direct business was offset by lower Wholesale revenues.

Within the NIKE Brand, revenues in North America advanced 12% on both reported and currency-neutral basis to $4,477 million. North America revenues benefited from incredibly strong demand for NIKE products with holiday retail sales increasing in double-digits so far in the season. The double-digit growth was aided by the return of sports activities and an outstanding start to the holiday season. The performance sports business reported double-digit retail sales growth, led by running, fitness and basketball. Women’s retail sales improved in the high double-digits, almost double the rate of the men’s business, owing to strength in footwear and apparel.

Sales for the NIKE Direct business were up 30% in the region. Digital sales grew 40%, marking record holiday sales in the Black Friday week. Sales at NIKE-owned stores accelerated in double-digits as traffic began to trend toward the pre-pandemic levels. Strong growth in AUR due to lower closeout inventory and significant year-over-year improvements in markdown rates and promotions also aided store sales.

Although retail sales momentum continued in the Wholesale channel, revenues dipped 1% due to lean inventory levels, Vietnam factory closures and longer transit times, which affected the flow of inventory supply to meet demand.

In EMEA, the company’s revenues rose 6% on both reported and currency-neutral basis to $3,142 million. Growth was driven by strong season-to-date holiday retail sales, which were up double digits, with growth across all consumer segments. The global football season and the Champions League tournament across the continent supported the revenue growth. Wholesale revenues grew 6% on a currency-neutral basis as it lapsed the prior year’s market closures.

The NIKE Direct business improved 6% on a currency-neutral basis, driven by double-digit growth at NIKE stores thanks to the improved traffic trends that benefited from a rise in tourism and back-to-school holidays. Traffic at EMEA stores increased year over year in double-digits coupled with better-than-anticipated conversions. NIKE Digital was down 1% compared with last year’s extraordinary levels of off-price sales undertaken to liquidate excess inventory. The company’s full-priced digital business rose more than 20%, resulting in a 30-point rise in full-price sales mix, double-digit growth in AUR and lower markdown rates and promotions. This aided gross margin expansion and return to profitability.

In Greater China, revenues slumped 20% year over year on a reported basis and 24% on a currency-neutral basis in the fiscal second quarter to $1,844 million. Revenues were affected by lower full-price product supply due to the factory closures in Vietnam. However, holiday retail sales to date have been favorable. Wholesale revenues in the region declined 27% on a currency-neutral basis. NIKE Direct fell 21% with soft revenues in both digital and owned stores.

Retail traffic continued to be impacted by COVID-related lockdowns. However, traffic recovered to pre-pandemic levels at times in the quarter. Digital sales plunged 27% due to a delay in product launch timing on SNKRS.

In APLA, NIKE revenues declined 8% on a reported basis and 6% on a currency-neutral basis to $1,347 million. Revenues were affected by declines in Asia-Pacific territories due to greater impact from factory closures in Vietnam and the business model shift in Brazil. This was partly offset by double-digit revenue growth on a currency-neutral basis in SOCO. Holiday retail sales so far this season grew versus the prior year despite supply chain disruptions and door closures in SEA&I and Pacific. NIKE Direct advanced 6% driven by 25% growth in NIKE Digital.

Revenues at the Converse brand improved 17% on a reported basis to $557 million. On a currency-neutral basis, revenues of the segment were up 16%, backed by strong growth across all channels in Europe and North America.

Selling and administrative expenses rose 15% to $3,759 million, driven by higher operating overhead and demand-creating expenses. As a percentage of sales, SG&A expenses increased 400 bps to 33.1% from the prior-year quarter.

Demand-creation expenses increased 40% year over year to $1 billion, owing to the normalization of spending at brand campaigns as the market laps the last year’s closures due to COVID-19, and sustained investments in digital marketing to facilitate the rising digital demand.

Operating overhead expenses were up 8% to $2.7 billion on higher wage-related expenses and increased technology investments to support digital transformation.

NIKE ended second-quarter fiscal 2022 with cash and short-term investments of $15,103 million, up $3.3 billion from the last year. These included strong free cash flow generation, partly offset by cash dividends and share repurchases. It had long-term debt (excluding current maturities) of $9,417 million and shareholders’ equity of $14,924 million as of the end of the fiscal second quarter.

As of Nov 30, 2021, inventories of $6,506 million increased 7% from the prior-year levels due to elevated in-transit inventories. The delays are mainly related to the extended lead times driven by the ongoing supply chai disruptions, partly negated by strong consumer demand.

In second-quarter fiscal 2022, the company returned $1.4 billion to shareholders, including dividend payouts of $437 million and share repurchases of $968 million. It completed 6-million share repurchases under its $15-million program approved in June 2018 in the reported quarter. As of Nov 30, it repurchased 60.8 million shares for $6.4 billion under the aforesaid program.

NIKE expects the operating environment to remain volatile due to business disruptions caused by the COVID-variants. The company’s fiscal 2022 outlook assumes inventory supply significantly lagging consumer demand across NIKE’s portfolio of brands. However, it anticipates significant long-term opportunity driven by the execution of its Consumer Direct Acceleration strategy. Consequently, it remains on track to deliver on its fiscal 2025 outlook.

For fiscal 2022, NIKE continues to anticipate revenue growth of mid-single digits. It raised the gross margin guidance, expecting 150 bps expansion driven by the robust demand environment against the lean inventory scenario across the market. It anticipates benefiting from increased full-price realization, which is likely to be above the long-term target due to lower channel markdowns. However, product costs are expected to increase in the second half due to higher macro input costs.

The company expects the supply chain costs for fiscal 2022 to increase from the previously estimated numbers due to higher impact in the second half of fiscal 2022. It now anticipates foreign exchange to be a 55-bps tailwind compared with the prior year.

The company expects SG&A growth in the mid-to-high teens for fiscal 2022 as demand creation expense normalizes and it continues to invest in consumer-led digital transformation capabilities. The effective tax rate is now estimated to be in the low-teens.

For the fiscal third quarter, the company expects revenues to increase in low-single digits year over year due to the continued impacts from lost production from the COVID-related disruptions in Vietnam.

Caleres, a retailer and wholesaler of footwear in the United States, China, Canada, China, and Guam, currently sports a Zacks Rank #1 (Strong Buy). Shares of the company have jumped 60.1% in the past year. You can see the complete list of today’s Zacks #1 Rank stocks here.

The Zacks Consensus Estimate for CAL’s current financial-year sales and earnings per share (EPS) suggests growth of 31.8% and 377.1%, respectively, from the year-ago period’s reported figures. Caleres has a trailing four-quarter earnings surprise of 796.2%, on average.

Steven Madden, which produces and sells fashion-forward branded and private label footwear, carries a Zacks Rank #2 (Buy) at present. SHOO has a trailing four-quarter earnings surprise of 41.9%, on average. Shares of the company have gained 24.7% in a year.

The Zacks Consensus Estimate for SHOO’s current financial-year sales and EPS suggests growth of 50.8% and 267.2%, respectively, from the year-ago period’s reported numbers. Steven Madden has an expected EPS growth rate of 15% for three-five years.

Under Armour, a leading retailer and wholesaler of sporting goods and lifestyle products, currently carries a Zacks Rank #2. UAA has a trailing four-quarter earnings surprise of 244.5%, on average. Shares of the company have risen 18.1% in the past year.

The Zacks Consensus Estimate for UAA’s current financial-year sales and EPS suggests growth of 25% and 396.2%, respectively, from the year-ago period’s reported figures. Under Armour has an expected EPS growth rate of 25% for three-five years.