The company’s customers can now wager at more than 200 tracks worldwide on premier Thoroughbred, Harness and Quarter Horse races. BetMGM CEO Adam Greenblatt said. “The BetMGM Horse Racing app is a key part of our market expansion plans and will accelerate our continued growth into 2022.”

The app has daily horse racing content, live streaming video and race replays. Through the app, users can wager on events in the United States like the Preakness Stakes, Belmont Stakes, the summer meet at Saratoga Race Course, Pegasus World Cup, and the Breeders' Cup World Championships. 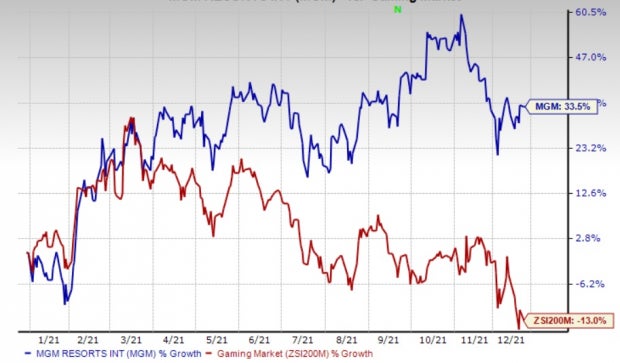 BetMGM is a major casino operator in New Jersey with a 30% gross gaming revenue (GGR) market share in October. The company has an estimated 32% national GGR market share across its live markets: New Jersey, West Virginia, Pennsylvania and Michigan.

BetMGM operations contributed $227 million to net revenues in the third quarter, up 17% sequentially. The operation results are encouraging compared with total net revenues of $178 million in 2020. In the third quarter, 16% of BetMGM's fresh players were from MGM and 42% of MGM M life sign-ups came from BetMGM. Considering the positive momentum in markets and its unique and unparalleled online and offline offerings, the company remains optimistic about long-term growth with revenue expectations of more than $1 billion in 2022. Over the long term, BetMGM’s EBITDA margins are expected to be 30-35%. MGM Resorts’ BetMGM recently announced that it has partnered with Gila River Hotels & Casinos and the Arizona Cardinals in an effort to expand its retail and online sports betting.

Coming to the price performance, shares of MGM Resorts have appreciated 33.5% so far this year against the industry’s decline of 13%. MGM Resorts carries a Zacks Rank #3 (Hold).

Churchill Downs sports a Zacks Rank #1 (Strong Buy). The company has a trailing four-quarter earnings surprise of 13.7%, on average. Shares of the company have soared 13.5% in the past six months. You can see the complete list of today’s Zacks #1 Rank stocks here.

The Zacks Consensus Estimate for Churchill Downs’ current financial year sales and earnings per share suggests growth of 51.4% and 684.3%, respectively, from the year-ago period.

Bluegreen Vacations flaunts a Zacks Rank #1. The company has a trailing four-quarter earnings surprise of 695%, on average. Shares of the company have surged 35.5% in the past three months.

The Zacks Consensus Estimate for Bluegreen Vacations current financial year sales and earnings per share indicates growth of 27.5% and 199.3%, respectively, from the year-ago period.

Camping World carries a Zacks Rank #2 (Buy). The company has been benefiting from the launch of a new peer-to-peer RV rental marketplace and a mobile service marketplace. It has been investing heavily in product development.

Camping World has a trailing four-quarter earnings surprise of 70.9%, on average. Shares of the company have appreciated 5.4% in the past three months. The Zacks Consensus Estimate for CWH’s current financial year sales and earnings per share suggests growth of 25.9% and 77.6%, respectively, from the year-ago period.

Conagra (CAG) Appears to be in Trouble on Cost Inflation