ACADIA (ACAD) Up on Resubmission Plan for Nuplazid sNDA to FDA

ACADIA Pharmaceuticals Inc. (ACAD - Free Report) announced that it intends to resubmit the supplemental new drug application (sNDA) for its marketed drug, Nuplazid (pimavanserin), for the treatment of hallucinations and delusions associated with dementia focused on Alzheimer’s disease psychosis (“ADP”). The company is planning to resubmit the sNDA to the FDA in the first quarter of 2022.

With this resubmission of the sNDA for pimavanserin, the company is now narrowing the focus of the proposed indication from dementia-related psychosis to ADP.

Shares of ACADIA were up 4.6% in after-hours trading on Monday following the announcement of the news. The stock has plunged 49.3% so far this year compared with the industry’s decrease of 19%. 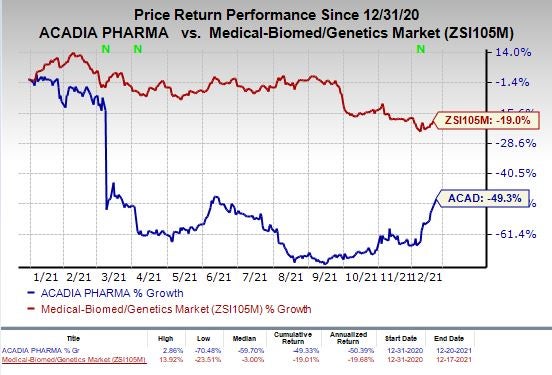 The resubmission of the sNDA will be based on positive data from two placebo-controlled studies – the pivotal phase III HARMONY study and the -019 study. Both these studies have prospectively met their primary endpoints.

We remind investors that, in April 2021, the FDA issued a complete response letter (“CRL”) to the sNDA for Nuplazid for the treatment of hallucinations and delusions associated with dementia-related psychosis or DRP.

The CRL indicated that the FDA has completed its review of the application and decided that it cannot be approved in its present form as it lacks statistical significance in some of the subgroups of dementia. Moreover, there was an insufficient number of patients with certain less common dementia subtypes, which was considered as a lack of substantial evidence of effectiveness to support approval. The CRL also stated that the phase II Alzheimer’s disease psychosis study, a supportive study in the sNDA filing, was found to be inadequate and not well controlled.

Please note that Nuplazid is currently approved in the United States for the treatment of hallucinations and delusions associated with Parkinson’s disease psychosis.

Nuplazid recorded sales worth $353.4 million in the first nine months of 2021, reflecting an increase of 10.2% year over year. The company is also developing pimavanserin to treat other neuropsychiatric conditions. A potential label expansion is likely to boost sale of the drug in the days ahead.

Precision BioSciences’ earnings have surpassed estimates in each of the trailing four quarters.