Nevertheless, the metrics witnessed growth from the pre-pandemic levels. GIS is progressing well with the Accelerate strategy, which aims to drive sustainable, profitable growth and robust shareholder returns.

General Mills also remains on track with prioritizing core markets, global platforms, and local brands along with reshaping its portfolio via strategic acquisitions and divestitures comprising the pet treats acquisition and the European Yoplait divestiture. Management expects at-home food demand to stay above pre-pandemic levels, as people are spending more time working from home. Higher pet population and more humanization and premiumization of pet food amid the pandemic are tailwinds for the company’s pet food category.

Adjusted earnings per share (EPS) of 99 cents fell 7% year over year on a constant-currency (cc) basis. The year-over-year downside can be accountable to lower adjusted operating profit. The bottom line lagged the Zacks Consensus Estimate of $1.06 per share. Nonetheless, the metric grew 1% on a cc basis from second-quarter fiscal 2020.

Net sales of $5,024 million increased 6% year over year, which included a 1-point positive impact from currency movements. Organic net sales rose 5% on the back of favorable organic net price realization and mix. The top line surpassed the Zacks Consensus Estimate of $4,876 million. Both sales and organic sales rose 6% each on a cc basis from second-quarter fiscal 2020.

Adjusted gross margin contracted 330 basis points (bps) to 32.2% due to input cost inflation and higher other cost of goods sold including costs related to supply chain disruptions. These were somewhat offset by cost savings from Holistic Margin Management and positive net price realization and mix.

North America Retail: Revenues in the segment came in at $2,975.5 million, up 2% year over year. The uptick can be attributable to positive net price realization and mix, which somewhat offset lower pound volume. Organic net sales inched up 1% year over year and 5% on a two-year basis in the segment.

Convenience Stores & Foodservice: Revenues increased 23% from the prior-year quarter to $540.7 million, driven by a sequential rebound in key away-from-home food channels like schools, restaurants, lodging and convenience stores. Organic sales rallied 23% year over year and 3% on a two-year basis.

Europe & Australia: The segment’s revenues fell 1% from the year-ago quarter to $463.9 million due to reduced pound volume, which somewhat offset positive net price realization and mix as well as favorable foreign currency translation. Sales fell 2% on an organic basis but remained flat on a two-year basis.

Asia & Latin America: Revenues rose 5% from the year-ago figure to $450.5 million on the back of positive net price realization and mix as well as favorable foreign currency impact, somewhat offset by lower volumes. Organic sales increased 5% year over year and 7% on a two-year basis.

Pet Segment: Revenues came in at $593.4 million, up 29% year over year on the back of solid volume growth and positive net price realization and mix. Net sales growth included 15 points of gains from the Tyson Foods’ (TSN - Free Report) pet treats business buyout (concluded on Jul 6, 2021). Organic sales increased 14% year over year and 16% on a two-year basis.

The company ended the quarter with cash and cash equivalents of $1,021 million, long-term debt of $10,973.6 million, and total shareholders’ equity of $9,524.5 million. General Mills generated $1,497.8 million as net cash from operating activities during the six months ended Nov 28, 2021. Capital investments amounted to $224 million.

The company paid out dividends worth $623 million and bought roughly 6.2 million shares for $375 million.

As part of its Accelerate strategy, this Zacks Rank #4 (Sell) stock concluded the sale of European dough businesses to Cérélia and European Yoplait operations to Sodiaal. The latter transaction is likely to hurt fiscal 2022 adjusted operating profit and adjusted EPS by 1%.

Constant-currency sales from the joint ventures of Cereal Partners Worldwide dropped 2% year over year for the quarter. In Haagen-Dazs Japan, sales rose 8% at cc from the prior-year figure.

Management revised its fiscal 2022 guidance, keeping in mind the impacts of a solid top line, higher-than-expected input cost inflation and the European Yoplait divestiture. General Mills now anticipates organic sales growth of 4-5%, up from the prior view of higher end of a 1-3% decline.

Moving on, adjusted operating profit growth (at cc) is expected to decline 1-5% compared with the previous view of higher end of a 2-4% decline. Adjusted EPS growth at cc is envisioned to be down 2% to up 1%, suggesting improvement from the earlier guidance of higher end of flat to down 2%. Free cash flow for fiscal 2022 is still likely to be 95% of adjusted after-tax earnings.

Shares of this company have gained 14.1% in the past three months compared with the industry’s 0.4% growth. 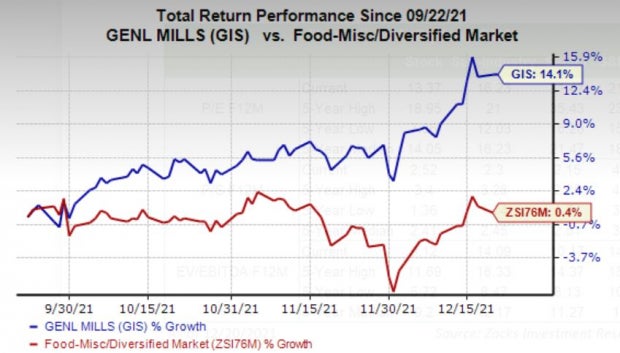 The J. M. Smuckers — a Zacks Rank #2 (Buy) stock — has a trailing four-quarter earnings surprise of 10.8%, on average. Shares of the company have gained 12.9% in the past three months. You can see the complete list of today's Zacks #1 Rank (Strong Buy) stocks here.

The Zacks Consensus Estimate for The J. M. Smuckers' sales for the current financial year suggests year-over-year growth of 0.03%, while the same for earnings per share indicates a decline of 5.6% from the year-ago period. SJM has an expected long-term earnings growth rate of 1.2%.

Hershey presently carries a Zacks Rank #2. The company has a trailing four-quarter earnings surprise of 4.4%, on average. Shares of Hershey have gained 9.4% in the past three months.

The Zacks Consensus Estimate for HSY's sales and earnings per share for the current financial year suggests growth of 8.9% and 12.6%, respectively, from the year-ago reported numbers. HSY has an expected long-term earnings growth rate of 7.7%.